China Labor Watch has announced that workers producing the iPhone 5 at Foxconn's Zhengzhou factory have gone on strike.

-----
China Labor Watch announced that at 1:00PM on October 5 (Beijing time), a strike occurred at Foxconn's Zhengzhou factory that, according to workers, involved three to four thousand production workers. In addition to demanding that workers work during the holiday, Foxconn raised overly strict demands on product quality without providing worker training for the corresponding skills. This led to workers turning out products that did not meet standards and ultimately put a tremendous amount of pressure on workers. Additionally, quality control inspectors fell into to conflicts with workers and were beat up multiple times by workers. Factory management turned a deaf ear to complaints about these conflicts and took no corrective measures. The result of both of these circumstances was a widespread work stoppage on the factory floor among workers and inspectors.

The majority of workers who participated in this strike were workers from the OQC (onsite quality control) line. According to workers, multiple iPhone 5 production lines from various factory buildings were in a state of paralysis for the entire day. It was reported that factory management and Apple, despite design defects, raised strict quality demands on workers, including indentations standards of 0.02mm and demands related to scratches on frames and back covers. With such demands, employees could not even turn out iPhones that met the standard. This led to a tremendous amount of pressure on workers. On top of this, they were not permitted to have a vacation during the holiday. This combination of factors led to the strike.

CLW Executive Director Li Qiang said, "This strike is a result of the fact that these workers just have too much pressure."
-----

Just recently, a massive riot erupted at a Foxconn plant when a security guard allegedly hit a worker. The riot resulted in the plant being shut down for a couple days. 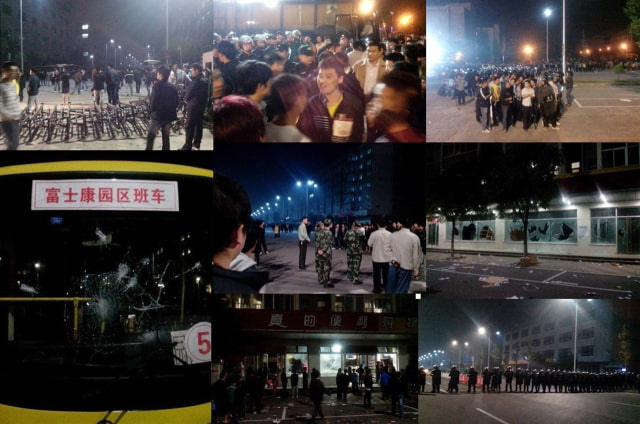