Apple has been ordered to pay Samsung's legal fees on an indemnity basis which is higher than the normal basis, according to an order published by the U.K. court.

Groklaw notes that this order was made since Apple did not correctly comply with the order to publicly acknowledge that Samsung did not copy the iPad.

-----
31. As to the costs (lawyers' fees) to be awarded against Apple, we concluded that they should be on an indemnity basis. Such a basis (which is higher than the normal, "standard" basis) can be awarded as a mark of the court's disapproval of a party's conduct, particularly in relation to its respect for an order of the court. Apple's conduct warranted such an order.

31. Finally I should mention the time for compliance. Mr Beloff, on instructions (presumably given with the authority of Apple) told us that "for technical reasons" Apple needed fourteen days to comply. I found that very disturbing: that it was beyond the technical abilities of Apple to make the minor changes required to own website in less time beggared belief. In end we gave it 48 hours which in itself I consider generous. We said the time could be extended by an application supported by an affidavit from a senior executive explaining the reasons why more was needed. In the event no such application was made. I hope that the lack of integrity involved in this incident is entirely atypical of Apple.
-----

Check out Groklaw for an overview of Apple's statements in the original notice and how the court determined they were false and misleading.

You can read the full order at the link below...

Read More [via Groklaw] [via Yousouf] 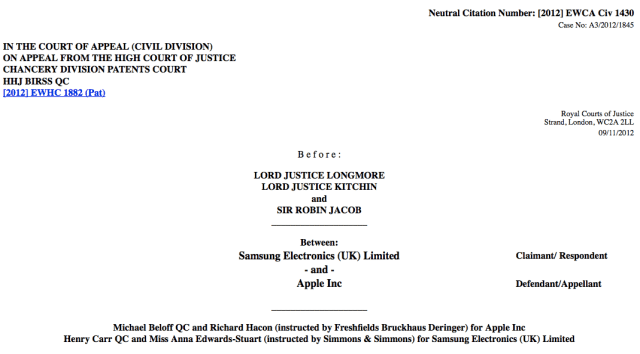 Pete - November 11, 2012 at 5:55pm
Wow - what a bunch of childish, sweary unproductive comments. You guys know that the CEO or MD or a large company doesn't get to make all the decisions within that company right? I'm sure Apple pay a legal agency handsomely for professional opinions and recommendations. Unfortunately that legal firm is probably American and they seem to assume that they own the world. As much as I love Apple products, I'm pleased to see the UK enforcing what was a flagrant act of rebellion, however amusing it was. ;) I'm fairly sure Apple is far less 'crooked' than other large companies as they know they're on the world stage. Look at Starbucks tax dodging schemes in the UK for example, now THAT is crooked. Amazon and many others employ similar tactics. If people choose to pay for Apple products which we all know are highly profitable then that's hardly Apples fault is it? I can't claim to have been 'robbed' because I chose to give someone money for my Macbook/iPad/iPhone/Mac Mini. (Incidentally, all those products are still worth good money on the second hand market)
Reply · Like · Mark as Spam

Rick - November 11, 2012 at 4:20pm
"I hope that the lack of integrity involved in this incident is entirely atypical of Apple. ". The isheeps would still not get it. Apple is company of Crook led by Tim Crook currently.... To Apple fanatics this is just another cool feature if Apple... Well those numb nuts would say the same- that's its a nice feature of Apple... if Tim Crook and his company raped their Mother, Wife, Sister and daughters...as they are raping their wallets and innovation in general....
Reply · Like · Mark as Spam

Lov3boyz - November 11, 2012 at 12:09am
As you know olympic sponsor is Samsung, how come UK will let you win apple ? TiM cook please use your brain to design new product and not use for sue other competitor. If apple going like this, sure will bankrupt soon...:(
Reply · Like · Mark as Spam
4 More Comments
Recent