Microsoft has reported the theft of five Apple iPads from its offices, according to the Daily Post.

The iPads were taken from three offices in Microsoft Building 5 on the campus at 1075 La Avenida St., according to Thompson. The theft was reported on Wednesday, said Thompson.

Microsoft reported that two iPad 2s and two iPad 3s with a combined value of more than $3,000 were taken sometime between Dec. 19 and Dec. 26 on the company's campus.

A police report also said a fifth tablet - described as an iPad 4, worth $729 - was taken as well.

Humorously, the article incorrectly believes the iPad 4 doesn't exist yet and suggests it might be a typo. Also, the Daily Post was keen to note that "No Microsoft products were reported stolen."

Read More [via Chronic] [via Adrian] 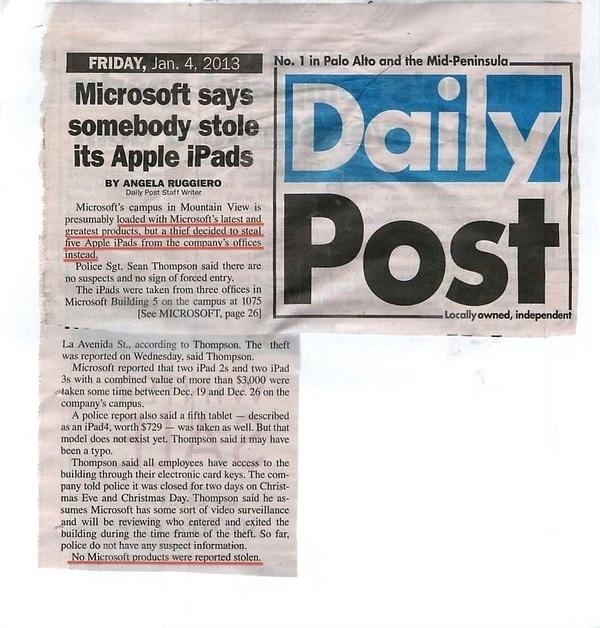 Lolwut - March 27, 2014 at 9:55pm
What kind of delusional company are these guys? After not putting any thought into windows 8 and using it to mock apple everything, they think they can just assume and predict for them? Just no. I'm so done with them.
Reply · Like · Mark as Spam

academia research - January 24, 2013 at 5:45pm
I would like to thank you for the efforts you have made in writing this article. I am hoping the same best work from you in the future as well. https://twitter.com/academiarsearch
Reply · Like · Mark as Spam

Crimson - January 7, 2013 at 5:19am
They rather steal used Apple products than any of the New Microsoft stuff. HAHA.
Reply · Like · Mark as Spam