Samsung has announced that sales of it's Galaxy S devices have surpassed 100 million.

Samsung Electronics’ flagship Galaxy S series surpassed the accumulated sales record of 100 million units from the supply side in only 2 years and 7 months after its launch in May 2010. Galaxy S III is selling at much faster rate of 30 million in 5 months and 40 million in 7 months, after becoming a million seller in only 50 days after its release last May. Currently, its average daily sales are 190,000 units. The driving force behind Samsung Electronics’ rise to the top on the global smartphone market is Galaxy S II which is gaining ground as a steady seller hitting the sales of over 40 million in only 20 months.

This follows a report yesterday from the WSJ that said Apple cut iPhone 5 component orders in half due to weak demand. 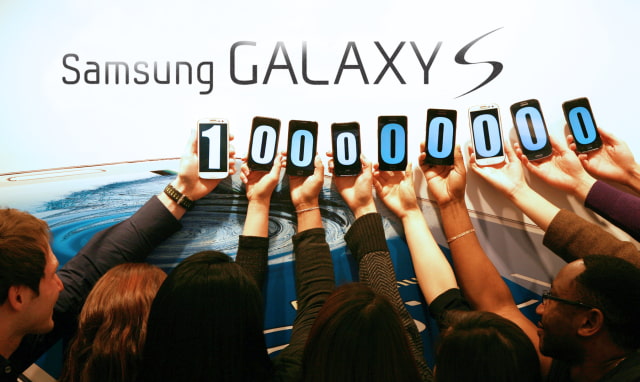 GirlsInTights - January 14, 2013 at 7:26pm
To the Samsung users, I heard that built-in video call that could almost reach out to many other phones except iPhone, but does that also include windows phone? But I know the fact that is Samsung phone has built-in application that enables users to block calls from unwanted callers. As I'm a user, who's been using iPhone since 2007, that operating system and everything else on the iPhone seems boring and old which is sad but true, but seeing all this bickering over two different phone that produced by two different comapanies makes my head turn around, is it really that necessary that we mock other phone users over popularity or the quality of phone? It really serves lots our needs, but it became too rediculous that we shun ourselves from different group of people by what brand of phone we own and admire now that simply 7 years old of imbecile wouldn do.. In these days, adults became little kid over two different phones.
Reply · Like · Mark as Spam

fackyo - January 14, 2013 at 5:37pm
Good for them !! I am glad. I was always again Samsung. Now there is no Jailbreak for the Iphone 4S or Iphone5. Fuck Apple ..Making the f**cking jailbreak impossible.So people are fed up they are switching to Galaxy3,A lot easier to root and jailbreak . I hope Iphone will be obsolete
Reply · Like · Mark as Spam

Thatcher - January 14, 2013 at 3:14pm
Bit of a kick in the face to Apple who have cut screen orders by half today. Tim Cook will be pissed off by this I'm guessing.
Reply · Like · Mark as Spam

6italia0 - January 14, 2013 at 3:05pm
Is that all? You would think they would be more but then I'm not really surprised either (if their referring to their whole galaxy s series line up)
Reply · Like · Mark as Spam
Recent