Saurik has announced that due to a mistake in the system used to request APTickets from Apple, all the tickets saved via Cydia are 'useless'.

Those of you who recently launched Cydia may have received a notice to "See TSS Center (below) to request iOS SHSH", and may be surprised to read the message, "No SHSH seems to be stored for this device".

In a length blog post, Saurik provides some great information about SHSH Blobs, APTickets, and TSS Servers and details what happened. He also notes that iOS 6 APTickets are really only useful for the iPhone 3G[S], iPhone 4, and iPod touch 4G thus far.

-----
At this point, I think I have described everything I need in order to explain the current situation: all of the APTickets Cydia itself requested from Apple for iOS 6 are useless. The word "useless" is important, as it is not accurate to use the word "corrupt": the data that was uploaded was not lost or damaged, and in fact all of the tickets that were stored verified per the algorithm from MuscleNerd.

Instead, the requests being made via Cydia to collect SHSH information for iOS 6 did not result in useful tickets. This is because, in order to better emulate the requests Apple had been making when I first started the service, I filter the manifests I send to Apple to only include information about files that had the partial digests I discussed earlier, as only files that have partial digests are relevant for SHSH.

This is a rather unfortunate situation; however, if you followed one of our TinyUmbrella tutorials on saving SHSH Blobs, you should be okay.

At the beginning of his post saurik notes that "I am here to be the bearer of bad news that will likely cause me to get a ton of hatemail". We would strongly urge readers against that; rather, be thankful for everything saurik and other developers have done for the iPhone community. 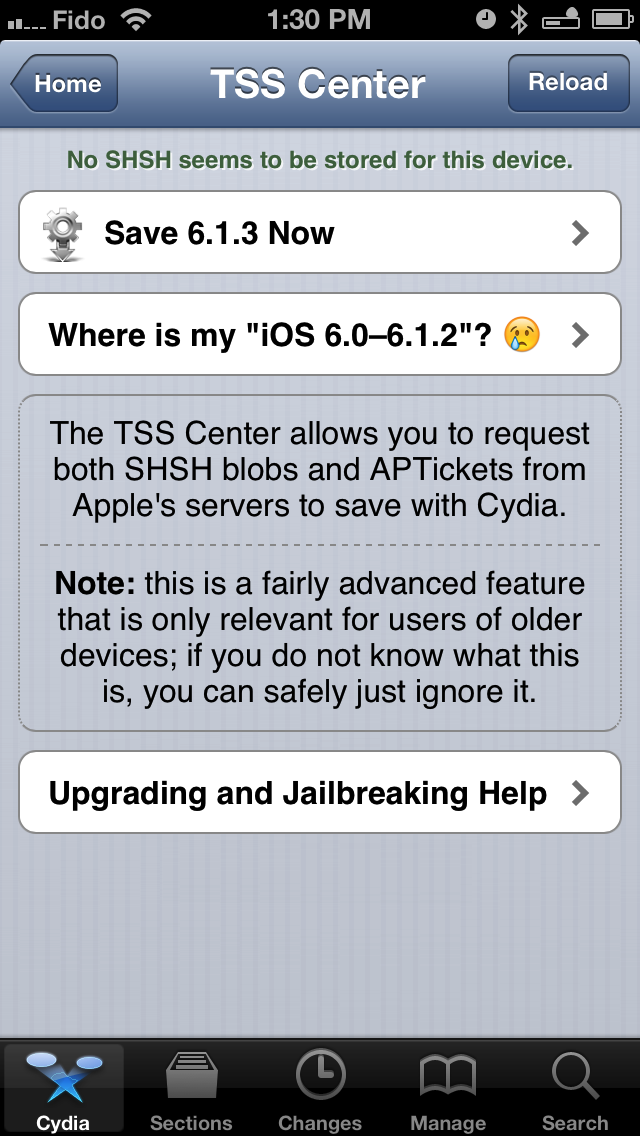 flower75 - January 19, 2014 at 4:53pm
Hello, I am sorry if my question is silly, I am new to everything here, jailbreaking, blobs etc. I have an Ipod 4G with 5.1.1 OS. I can't save any SHSH with Tinyumbrella and apparently, I can't with Cydia either. Does it mean I will never ever be able to downgrade if one day I decide to try a newer version of iOS ?
Reply · Like · Mark as Spam

T - May 16, 2013 at 7:07pm
Had a long you are a communist conversation with apple. Last I looked jailbreaking was still legal unless I missed something. But anyway I told them it should be my choice to put what I want on MY phone it was not bought from them and they pretty much told me they still own it we are just privileged to get to use it. O-O WHAT! Really! Because of this error I am stuck with an unlocked phone that still can't get 3g service like I did because Apple is freak-en dumb. But that is off topic. Because in the conversation she mentioned they do what they due because of jail breakers and I laughed and ask is it illegal she said no and I then told her well if apple let us do every thing with our phones that they could do and stop being greedy Ba&^%$ there would be no reason for us to have to jailbreak and I think apple is as bad as a communist leader..... Click end of conversation.... Now I am stuck with un jail broke phone that is half useless to me because redsn0w won't even read any of the 6.0 I have downloaded and if I go back to 4.1 I still loose. :(
Reply · Like · Mark as Spam