A new version of Boxee restores partial Hulu support along with Google Video, Yahoo!, and YouTube.

As we’ve seen over the past few weeks, users will take matters into their own hands to get the content they want. witnessing this, we’ve decided to enable access to their favorite content using a new built-in RSS reader optimized for video. like IE, Firefox, or Google reader, the RSS reader supports Google Video, Yahoo!, YouTube and feeds from many other websites. while it’s not as attractive or robust as our previous Hulu application, it will additionally support Hulu’s public RSS feeds.

New Features:
- App Box - this is a first take at an application “store” that makes it easy for users to install new apps and plugins. there is also native support for 3rd party repositories, so you don’t have to rely on boxee as a gatekeeper for what goes into the official boxee app store. for example, you can add dir.boxeehq.com as a repository to get access to all the boxeehq.com apps.
- auto update - long time in the making and really bad form on our part for not having it from the beginning. but better later than never. no need to check on Twitter or our blog to know that there is a new version. now you’ll be prompted to update boxee whenever there is a new release ready. 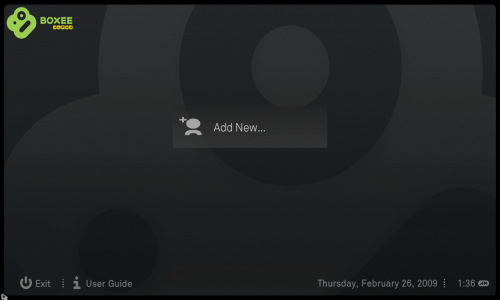