The next version of Android, 4.4, will be named after the famous chocolate-covered candy, KitKat. The news first broke on Sundar Pichai Google+ account, head of both Android and Chrome. In addition to the new name, Pichai announced that Android OS has passed over 1 billion device activations.

All this Android innovation is driving tremendous ecosystem momentum and I’m excited to share that together we’ve now passed 1 Billion Android device activations. Huge thanks to the entire Android community from the hardware manufacturers, chip makers and carriers to the developers and content creators to all of you - our Android users around the world - for making this possible.

On my return from Asia, I was also thrilled to find this guy waiting to greet me on the front lawn -- love the new #AndroidKitKat statue and can’t wait to release the next version of the platform that is as sweet as the candy bar that’s one of our team’s favorites:)

Google has internally referred to this release as Key Lime Pie, but the company reportedly decided to switch to the KitKat name as it was a favorite snack of many Android developers and since "very few people actually know the taste of a key lime pie."

Android is the operating system that powers over 1 billion smartphones and tablets. Since these devices make our lives so sweet, each Android version is named after a dessert: Cupcake, Donut, Eclair, Froyo, Gingerbread, Honeycomb, Ice Cream Sandwich, and Jelly Bean. As everybody finds it difficult to stay away from chocolate we decided to name the next version of Android after one of our favorite chocolate treats, Kit Kat!

Reportedly, this is "not a money-changing-hands kind of deal," and Google simply wanted to do something "fun and unexpected." 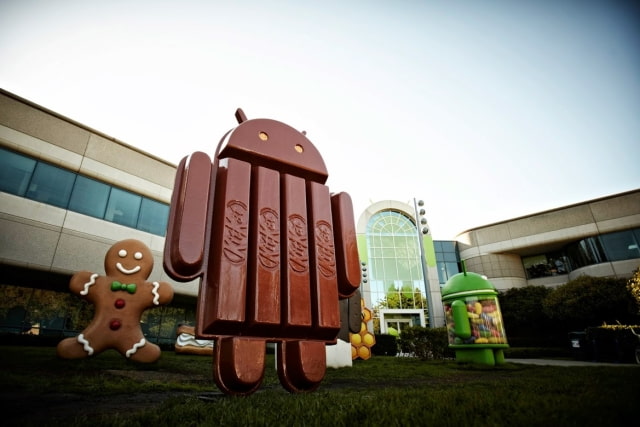 ervick - March 28, 2016 at 12:40pm
It is a brand name with great released features from its installment Android versions. But I think Jelly Bean is more popular and most likeable among its other versions. - http://eatmywords.com/blog/
Reply · Like · Mark as Spam
1

Nicko - September 4, 2013 at 3:21pm
Nestlé have been suggested to source cacao beans from West African Ghana where child labour is employed. Interesting move. Now I want Android products less- given I never wanted it my desire for it has now become indefinitely inverse. Really(?) Kitkat... They can't be serious. African child labour made chocolate code. I can hear the slogans: have a break have a kikat because Android's operating system will give you the shits so much you'll need one. Mwahaha!!
Reply · Like · Mark as Spam
1

ratGT - September 4, 2013 at 10:03am
See, this is the EXACT reason I dislike this company and its mobile OS - It's their inconsistency! As equally illogical and fragmented as their naming scheme, going from kinds of sweets to a specific sweet, JUST like that, without any further logic other that their staff digg it! --- They might as well call the next one Android 4.5 McDonalds Apple Pie!!!
Reply · Like · Mark as Spam
1