iH8Sn0w, the hacker behind Sn0wBreeze, reveals that Apple has killed the ability to restore custom IPSWs for iOS 7 with the release of iTunes 11.1.

--
So iTunes 11.1 seems to kill Custom IPSWs for iOS 7. Alternatives will be needed to perform custom restores.

(More technically, iTunes 11.1 recalculates the partial-hash of every img3 instead of using the ones in BuildManifest.plist). Which results in modified images having a different hash and being rejected by Apple’s TSS.

Thankfully, it appears as though iH8Sn0w is already working on a tool to restore without iTunes. You can follow iClarified on Twitter, Facebook, Google+, or RSS for updates. 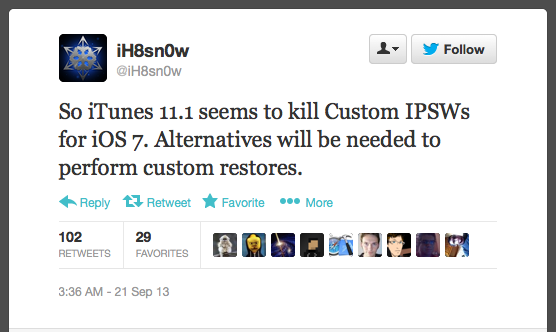 quid - September 23, 2013 at 7:34pm
I think the main point is that, Jailbreaking an iPhone and coding apps to make it more useful was innovative and more useful to the JB community as well as the non-JB community because Apple Steals(cough-cough) I mean implements those ideas. with out paying i may add. The memory optimization and useful tools made the iPhone more efficient than a non-jailbroken one. The ability to change you root password as well as other vulnerability fixes that were found and fixed by the JB community made it more secure. When you JB you phone it patches Apples security flaws = more secure. JB Devs make money of of their apps as well and the majority of JBers are upstanding citizens and pay for apps. I spent about $100 on JB apps and only $30 on iOS apps because the iOS apps do not integrate functionality I have to press and app icon instead of swiping a side of my screen or some other gesture, created by the JB community devs. For the people that worry about piracy, JB apps are pirated just a much as the iOS apps so the JB community is against the piracy of apps as well. It hurts us all. For the people are worried about stealing is happens in every aspect of life stealing is a sin no matter the form, some steal food to live, some steal apps to be cheap (computer and ios and JB apps, video games, etc), some steal movies, some steal ideas and market them as their own Apple steals from JB community, Microsoft stole from Apple for windows, Samsung and many other major corporations take ideas and implement them. What do you think all of those lawsuit are about. I have jailbroken since the first iPhone up to 4s and on my iPhone 2G, i could copy paste, change settings without going into settings app, take video, play video to tv, encode video, post to twitter, multitask, schedule memory optimization and reboots without holding power button, cut crop and paste pictures, send attachments, have unlimited apps in folders, multiple wallpapers and video wallpapers, send and reply to text messages from any application on the phone, the Big boss app that turned you screen into a flashlight or flashing beacon before the iphone has an actual flash(just thought i would mention that because of the flashlight demonstration that was specifically pointed out in the iOS 7 demonstration, pathetic) and this was all in a Jailbroken iOS 1.1.4 iPhone 2G. The phone never bogged down or crashed or had any lag. As with any computer if you put too much crap on there it will bog it down. After the JB loop that was closed from 5.1.1, I switched to Android and I can customize my phone to look like anything I want and do anything i want. If I don't like an android flavor I can use another Rom or if i don't like that i can build my own ROM from source (now I know most people will not do that, but they have the option if they so choose) And lastly for the people that say that the phone is more vulnerable to attack, that is an out right lie, because if I can change my root password from "alpine" to an alphanumeric password then by default I'm more secure because i'm the only one that knows the password. the JB community finds the exploits, JB's the phone and patches the exploit so the phone can't be hacked, = more secure. people who are worried about security probably keep their passwords on sticky notes on their desk as well. "Just sayin"
Reply · Like · Mark as Spam

yoyoyo - September 22, 2013 at 10:43pm
I think the JB devs/community should sue Apple for stealing their IP's. Heck if they win they gonna recieve BIG $$$$$$ and use it for future JB development for Apple products.
Reply · Like · Mark as Spam

Boss - September 22, 2013 at 3:55pm
Apple is not interested in pleasing 10million Jailbreakers. JB scene been developing shit for them for free for 6 years now and this is how they reward the devepers. Funnily enough they are stealing JB-features without paying penny for the guys that invented them. Like in iOS7 the SBSetting insprired switches..... looks like theyre digging they own grave.... only way is down.
Reply · Like · Mark as Spam

Rudi Lee - September 22, 2013 at 7:11am
don't jb ur iphone. respect app developers. they need money just like u. jb is stealing and if u r a true buddhist or christian or whatever, u know stealing is a sin
Reply · Like · Mark as Spam
13 More Comments
Recent