Gizmodo has posted some preliminary benchmarks of Windows 7 versus Vista. Its important to note that they have only received the 32-bit version of Windows 7 RC1. More significant improvements should be seen with the 64-bit version run on a quad core machine.

Using PCMark Vantage and 3DMark Vantage Windows 7 came out ahead, only losing to Vista on a single test in 3DMark.

Interestingly, Windows 7 lagged slightly behind Vista in some real world measures though it still felt faster due to its improved interface.

Microsoft is counting on Windows 7 to replace the widely disliked Vista operating system. It will be pitted against the Apple Mac OS X Snow Leopard operating system which is coming out later this year. 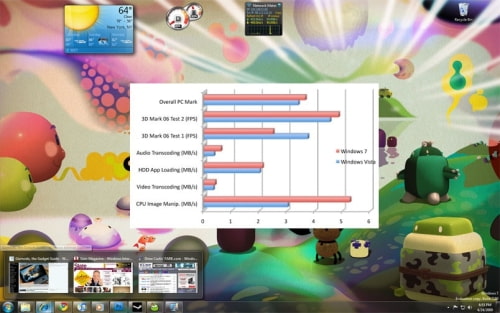