The evad3rs have released an update to evasi0n that brings the ability to jailbreak iOS 7.0.5. iOS 7.0.5 was released earlier this week for the some iPhone 5s and iPhone 5c models (the GSM + CDMA editions).

Apple has already patched the exploits evasi0n7 uses in the latest iOS 7.1 beta, as we reported yesterday, so this will be the last firmware you will be jailbreak iOS 7 for some time.

You can download the latest version of Evasi0n, as well as previous versions over at our download page.

Please follow iClarified on Twitter, Facebook, Google+, or RSS for updates as they become available. You can learn how to jailbreak your device by visiting the iClarified Jailbreak Wizard. You can download the Evasi0n jailbreak tool from here. 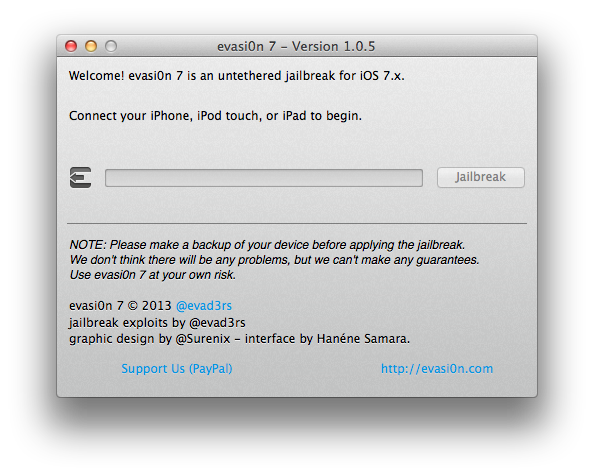 Computer_dude - February 6, 2014 at 4:55pm
Yea you are good to jailbreak ios 7 with evasion. I did it and it worked great. Just follow the instructions! Good Luck
Reply · Like · Mark as Spam