A screenshot is circulating online that shows an iPhone temperature warning if your device overheats.

According to Apple's Knowledge Base it is a real screen even though few have ever seen it.

If the interior temperature of iPhone 3G exceeds normal operating temperatures, you may experience the following as it attempts to regulate its temperature:
- iPhone 3G stops charging
- Display dims
- Weak cellular signal
- Temperature warning screen appears with the message "iPhone needs to cool down before you can use it" (see image below)

This message appears when the operating temperature has become too hot. This is a safety mechanism that protects the components of your iPhone 3G. If this message appears, you should turn iPhone 3G off, move it to a cooler environment, and allow it to cool before resuming use.

Note: When this message appears, iPhone 3G may still be able to make emergency calls. 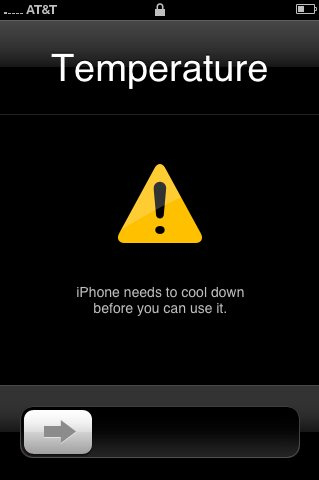 Paultart - May 11, 2009 at 2:47pm
Looks like Apple learnt their lesson with the number of 2G iPhones they had to replace.
Reply · Like · Mark as Spam
Recent