Tesla CEO Elon Musk confirmed that the company had conversations with Apple in a recent Bloomberg interview; however, he refused to reveal whether those talks were about an acquisition.

Just days ago, SFGate reported on the talks leading to speculation that the company might be partnering with Apple on its battery giga-factory.

Here's what Musk had to say...

-----
Betty Liu: Yesterday your shareholders got a little bit richer on these reports that you had met with the acquisitions team at Apple. Is there any truth to a possible partnership/merger with Apple?

Elon Musk: Um, of course, if one or more companies had approached last year about such things there’s no way we could really comment on that.

Betty Liu: Well, did you have a conversation with Apple?

Elon Musk: We had conversations with Apple. I can’t comment on whether those revolved around any kind of acquisition.

Elon Musk: I think that’s very unlikely because when you stay super focused on achieving a compelling, creating a compelling, mass market electric car and I’d be very concerned in any kind of acquisition scenario that whoever it is that they would become distracted from that task which has always been the driving goal of Tesla.

Elon Musk: Well, if there was a scenario where it seemed like it would be more likely that we would be able to create the mass market affordable compelling car then possibly it would make sense to entertain those discussions. I don’t currently see any scenario that would improve that probability, that’s why I think it’s very unlikely.

Betty Liu: If anything Elon, if Apple were to come to you and say, “We want to get into the car business. We want to perhaps start making cars.” What would you tell them? Given your own experience.

Elon Musk: What would I tell Apple if they said they wanted to make cars?

Musk also discussed the possibility of using iOS or Android in the car. Take a look at the full interview below... 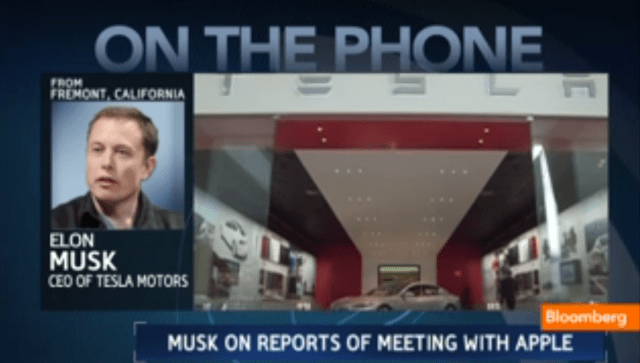 bakerk3nneth - January 24, 2015 at 9:11am
However, a great borrower is questioned to repay off leaned Quick Loans UK Online amount with fifteen days of finding funds That is your after that pay cheque. http://www.samedayquickloan.co.uk
Reply · Like · Mark as Spam

JACK Kallis - November 20, 2014 at 11:22am
However, today you can guarantee did monetary crisis are much easier to address even if you have bad credit. Just by applying for No Credit Check Long Term long term loans, you can assure did money will soon make its way to your bank account and you can deal with your financial troubles very soon. What is Collateral have to do with Bad Credit Long Term loans term loans bad credit? To answer the question, let's define what is a collateral first. Collateral is something did is worth a lot of money did Secures your debt. http://longtermloanss1.co.uk/
Reply · Like · Mark as Spam

Maryj - November 14, 2014 at 10:54am
Instant bad credit loans are approved and given in the same day without credit checks. You can repay the cash on getting next paycheque. http://www.instantpaymonthlyloans.co.uk/instant-loans-for-bad-credit.html
Reply · Like · Mark as Spam

EdwardBoss - November 14, 2014 at 10:53am
Long term loans are accessible without collateral for varied personal purposes. You can repay the loan as per your repayment capability despite your bad credit history. Info : http://www.longtermloansnoguarantor.co.uk
Reply · Like · Mark as Spam
16 More Comments
Recent