Following user complaints, Apple has posted a tool for customers who want to delete the free U2 Songs of Innocence album from their iTunes account. Apple gifted the album to all its iTunes users; however, many users became upset after they discovered that the album had been inserted into their iTunes purchase history.

If you would like U2’s Songs of Innocence removed from your iTunes music library and iTunes purchases, you can choose to have it removed. Once the album has been removed from your account, it will no longer be available for you to redownload as a previous purchase. If you later decide you want the album, you will need to get it again. The album is free to everyone until October 13, 2014 and will be available for purchase after that date.

Apple spokesman Tom Neumayr’s told Re/code, “Some customers asked for the ability to delete ‘Songs of Innocence’ from their library, so we set up http://www.itunes.com/soi-remove to let them easily do so. Any customer that needs additional help should contact AppleCare.” 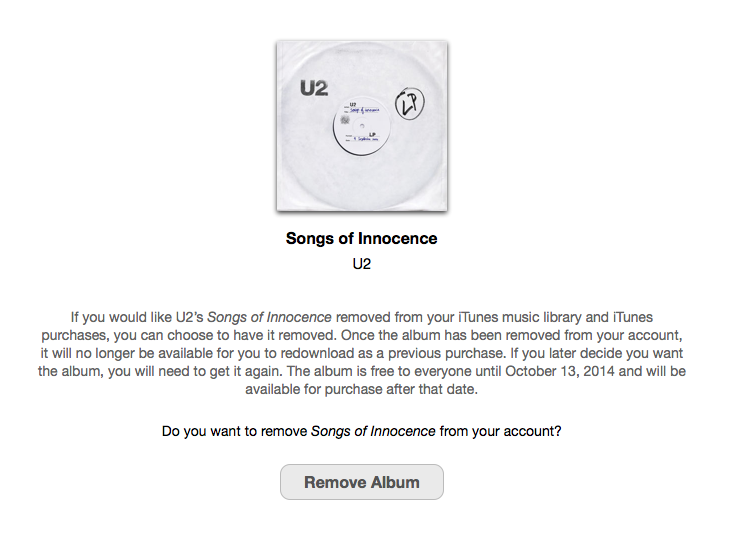 Intrusive - September 16, 2014 at 4:29am
You can swipe to delete other songs, but not this horrible godawful U2 garbage. The fact that it was inserted in MY device without my authorization makes me very nervous, and then furious. I have had 3 iphones, and was considering a Mac for my music production hobby, there is absolutely no way now. None. This lame stunt, showing off their ability to access my hardware has thoroughly creeped me out. Now a special tool is needed to root it out?? Just wow....
Reply · Like · Mark as Spam

StewartG - September 15, 2014 at 10:03pm
This is such a great classic band. I've been a fan forever. I love this album too and I'm so happy especially because it was free. Ungrateful people don't want it. Really? You can simply uncheck them from your iTunes and done. No. See for all this dramatic complaining. Get a life. I love love love the album. Thank you iTunes and thank you U2.
Reply · Like · Mark as Spam

odedo1 - September 16, 2014 at 4:22am
Apple didn't want to do it a new album from U2 would have made them a lot of money ( give it for free ) But U2 forced Apples hands and anybody who grow with U2 really appreciate it, great album!!! and if you don't want it don't download nobody is fixing you.
Reply · Like · Mark as Spam