According to new research by the AAA Foundation for Traffic Safety, Apple's Siri causes a high level of mental distraction in drivers. The study also analyzed mental distraction when using vehicle entertainment systems from Toyota, Chevrolet, Chrysler, Ford, and Mercedes.

Using instrumented test vehicles, heart-rate monitors and other equipment designed to measure reaction times, Dr. David Strayer and researchers from the University of Utah evaluated and ranked common voice-activated interactions based on the level of cognitive distraction generated. The team used a five-category rating system, which they created in 2013. 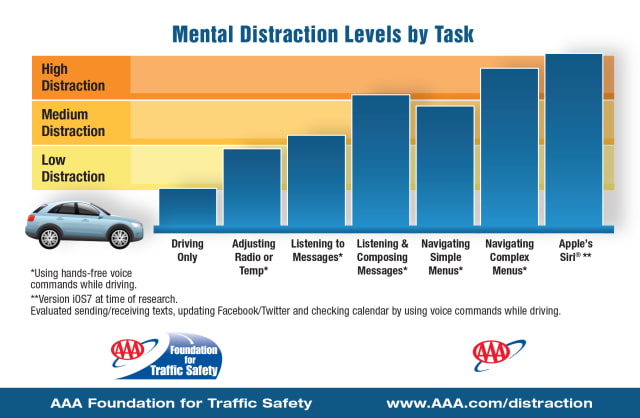 On the five point scale, Toyota’s Entune system garnered the lowest cognitive distraction ranking (at 1.7), which is similar to listening to an audio book. In comparison, the Chevrolet MyLink resulted in a high level of cognitive distraction (rating of 3.7). The other systems tested ranked in between those two. The Hyundai Blue Link was rated at 2.2, the Chrysler Uconnect at 2.7, the Ford SYNC with MyFord Touch at 3.0 and the Mercedes COMAND was rated at 3.1.

“We already know that drivers can miss stop signs, pedestrians and other cars while using voice technologies because their minds are not fully focused on the road ahead,” said Bob Darbelnet, chief executive officer of AAA. “We now understand that current shortcomings in these products, intended as safety features, may unintentionally cause greater levels of cognitive distraction.”

Notably, when Apple's Siri was used to perform a broader range of tasks including using social media, sending texts and updating calendars, it caused the highest level of mental distraction, reaching category 4.

To put this in context, listening to the radio was previously rated as a category 1 distraction; talking on a hand-held or hands-free cell phone resulted in a category 2 distraction; and using an error-free speech-to-text system to listen to and compose emails or texts was a category 3 distraction.

The study comes just as Apple CarPlay has gone live on aftermarket head units such as the Pioneer NEX.

Take a look at the video below for more information... 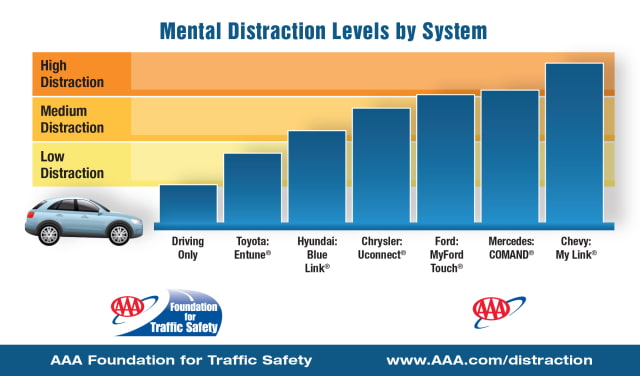 Grave hole - October 8, 2014 at 10:03pm
Seriously? Did they even test every feature even with just a simple voice control by using "hey siri"? What a joke they made. This 'study' is more likely paid, besides why test it on mental people. Wouldn't they be day dreaming half the time because they would be distracting themselves anyway. This is what these claims used towards siri. What's next, mental people will find iphone distracting from classrooms?
Reply · Like · Mark as Spam

Grave hole - October 8, 2014 at 10:00pm
You get a bribe for your jealousy spew like every samsheep. You should start a riot to make a cult in order to do any better for it to work.
Reply · Like · Mark as Spam
1

Mr. Common Sense - October 8, 2014 at 9:56pm
What this study lacks, is that some people have a higher skill set then others. Example 100 people can play a video game, yet all get different scores, & level advancement. Also, there is a little common sense as well. In high speed and high traffic area, there should be zero distractions regardless if it's the radio or voice commands. I have no problem keeping control of my car using voice commands, or adjusting heat, radio etc. However, I don't do anything except pay attention to the road in danger zones. I save that for straight roads, with low traffic & before intersections.
Reply · Like · Mark as Spam

Gern Blansten - October 8, 2014 at 7:50pm
Of course doing anything but paying exclusive attention to driving is a "distraction". More so when it requires physical interaction. Would be interesting to see a retooled version of this test with IOS8 and "Hey Siri", or even CarPlay when that becomes generally available.
Reply · Like · Mark as Spam

Tmel4198 - October 8, 2014 at 7:29pm
This is one of those stupid studies that decided to bash on apple and put Siri at the top of the study. I find using my phone less distracting than some douche bag with a honda civic and a huge fart can with some Mexican driving it
Reply · Like · Mark as Spam
9 More Comments
Recent