A new report from Phoenix Marketing has found that an impressive 11% of all credit card owning households and 66% of all iPhone 6 owners have signed up for Apple Pay. Most users linked a credit card (82%) but 53% linked a debit card and 20% registered a GPR prepaid card.

Setting a new standard in conversion from ‘app-ready’ to ‘app usage’, 88% of those setting-up the wallet went on to use Apple Pay to make an in-store or in-app purchase. In the pre-Apple Pay market, the average conversion rate hovered around 50%. The research estimated the Apple Pay user base at around 8 million households and some 12 million individuals -- since the average household purchasing an iPhone 6 purchased more than one handset.

“However, the early-on transaction potential is being undercut by low repeat usage and lost payment opportunities,” said Greg Weed, Director of Card Research at Phoenix. “The demand is there: 59% of Apple Pay users have gone into a store and asked to make a purchase with Apple Pay. But so is the disappointment: 47% visited a store that was listed as an Apple Pay merchant only to find out that the specific store they visited did not accept (or were not ready to accept) Apple Pay.”

“Even though Apple Pay users generally give the scheme high marks and 23% expect to significantly increase use over the next 3 months, problems at check-out are downgrading transaction potential,” said Leon Majors, Senior Vice President at Phoenix. “Two-out-of-three Apple Pay users have reported a problem at checkout – mostly related to terminals not working or taking too long to make the transaction, inaccurate posting of transactions and the inability of cashiers to help buyers who needed assistance in using Apple Pay,” Majors added.

“Since Apple Pay is still in an introductory mode and the NFC acceptance network still has a long way to go, adding a continuously updated ‘local store directory’ to the Passbook app is a necessary, short-term product improvement,” said Mr. Weed. “Posting a list of participating retailers on a website is not cutting it. In the last four months, 48% of users have paid with Apple Pay just one time and that’s not going to cut it either.”

The Phoenix report, ‘Apple Pay: The First Four Months is part of an ongoing Apple Pay study. The company expects to survey 16,000 customers in 2015 to monitor the new mobile payments platform. 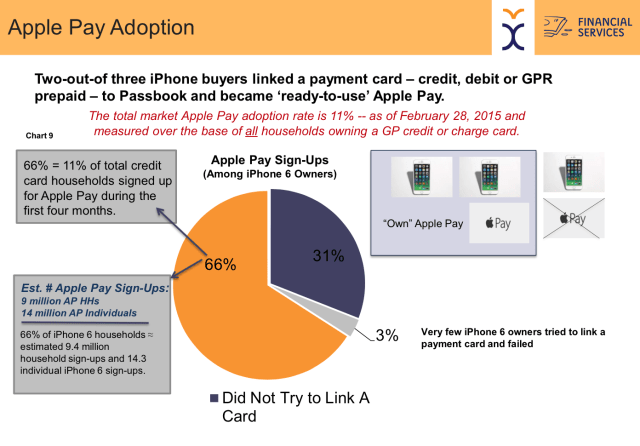 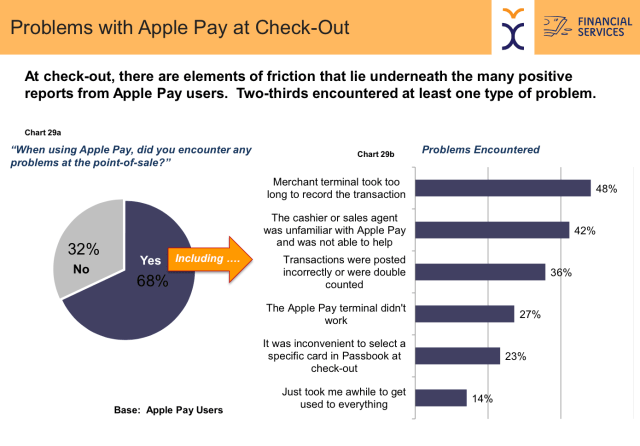 SimonSays - March 31, 2015 at 10:19pm
I use apple pay on a daily basis and have yet to encounter a single problem other than the idiotic cashiers asking to see my phone and ID.
Reply · Like · Mark as Spam

NoGoodNick - April 1, 2015 at 3:07am
You're clearly dreaming. Some stores have issues every single time I visit. Other sites (stores) falsely claim to accept Apple Pay but don't
Reply · Like · Mark as Spam

iPhone 6 Plus is my boy - March 31, 2015 at 9:39pm
Apple Pay did okayish in the beginning. But they shouldnt charge merchants extra fees for using Apple Pay when they already get 2-3% fees from VISA/MC/etc. Bad move Apple
Reply · Like · Mark as Spam

Apple pay all the way - April 1, 2015 at 10:55am
Bad move by Apple? The banks and stores got involved from this, it was their idea to implement cards into Apple pay to use it. It's their fault. Apple was the one that asked the stores.
Reply · Like · Mark as Spam
4 More Comments
Recent