An early preview of Windows 10 is said to run better than OS X on the new 12-inch Retina MacBook, according to computer science major Alex King. On his blog, King notes that he has enjoyed the 2015 MacBook and has a bootcamp setup with Windows 8.1 and OS X Yosemite. King decided to upgrade Windows 8.1 to the early preview of Windows 10 and found that Microsoft's latest operating system ironically outperforms OS X on the MacBook.

Here's the real kicker: it's fast. It's smooth. It renders at 60FPS unless you have a lot going on. It's unequivocally better than performance on OS X, further leading me to believe that Apple really needs to overhaul how animations are done. Even when I turn Transparency off in OS X, Mission Control isn't completely smooth. Here, even after some Aero Glass transparency has been added in, everything is smooth. It's remarkable, and it makes me believe in the 12-inch MacBook more than ever before.

King notes that while Windows 10 does look and run great, there are some current compatibility issues with the new MacBook. For instance, there's no bluetooth support and some boot camp drivers were not automatically recognized. Additionally, not all applications scale natively and do not support the full resolution of the retina display, causing the applications to appear blurry.

The new 12-inch Retina MacBook is still seeing lead times of 3-5 weeks, despite launching about a month ago. If you're lucky enough to get your hands on one, try out Windows 10 and let us know what you think. 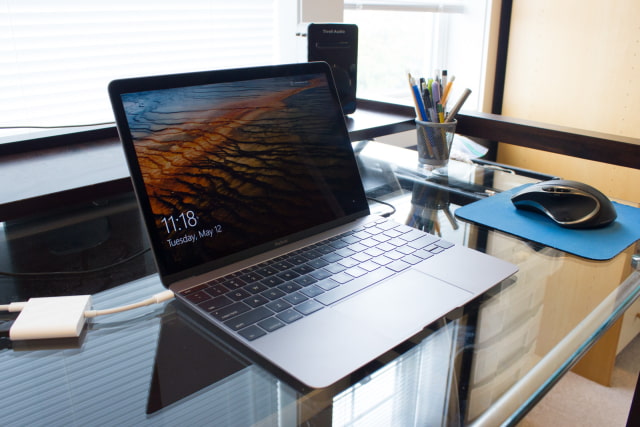 Nat - May 17, 2015 at 5:05pm
Apple has gotten to work for years of different versions. It only works slower because it doesn't run owc or because OS X has so much more to offer that takes up performance. Windows doesn't worry about anything that much for consumers, that's why you may think it runs good with not much to do. Think of it as supply and price demand. Price is performance, supply is how much an OS offers with takes up most performance. Aside that, I myself an apple user say windows runs slower. I use plugins extensions on safari to extend my experience with safari. Another advantage there!!
Reply · Like · Mark as Spam

Woz - May 21, 2015 at 4:52pm
Please explain what OSX offers that windows doesn't? I use extension on Chrome to add to the Chrome experience how is that different from plugins from Safari?
Reply · Like · Mark as Spam

Nat - May 21, 2015 at 4:56pm
Click to pluggin is an extension that allows content to play where you want on a specific site th at prevents unclicked areas from loading it automatically like ads. Another extension is flash to html where html5 is used instead of flash garbage, and most of all, flux which helps dim the macbook brightness at a specific time of day for day and night to prevent eye strain.
Reply · Like · Mark as Spam