Angela Ahrendts has begun preparing employees for the in-store launch of the Apple Watch via an internal employee video.

Ahrendts said that “this is where the rubber hits the road, and now we need to make sure that we are above and beyond ready.” She also added that Apple needs to “make sure that [it has] the best customer experience and that [this launch] is faster, smarter, and better than [Apple has] ever done before.”

Bean noted that this is a “different launch” compared to past Apple debuts.

“It’s going to be a little tougher to get everyone the exact [Watch] that they want,” so Apple is using a new “Reserve and Pickup” feature online, says Bean.

Customers will be able to visiting the online Apple Store at 8am each day to check if a local store has their desired Apple Watch model in stock. If it is available, the customer can reserve it and choose a time for pickup. The service will be available in all countries that have launched the Apple Watch.

Apple will also provide an end-to-end sales experience in stores. Bean said employees will be able to use the EasyPay iPhone system to 'run' an Apple Watch to customers who are in the store. In addition, customers will be able to reserve unavailable models while there.

“This is our moment to shine, this will be a launch unlike any we’ve ever had before… this is what you were born to do, this is why you are at Apple,” Ahrendts told employees.

Notably, Apple has also told retail employees that they can let customers play with a working Apple Watch demo unit that is paired to an iPhone. Previously, customers could only use a constricted model stuck to a table or wear a sample model running a demo loop.

It's unclear exactly when in-store sales of the Apple Watch will begin; however, Tim Cook has hinted that this could happen in June. 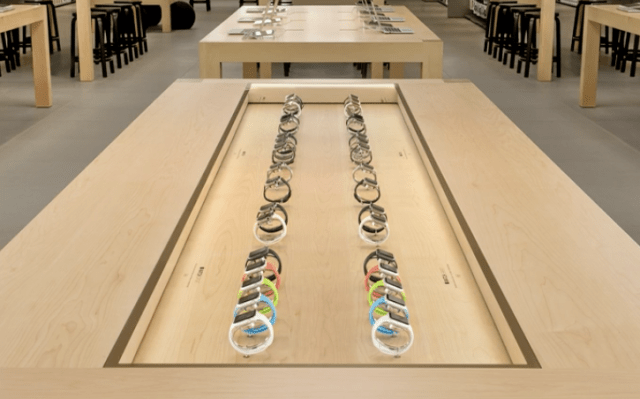 PaulieP - June 1, 2015 at 8:47pm
This is what should've happened in the first place at the original launch. A bit too late Angela, but nice job confusing the crap out of consumers and your employees.
Reply · Like · Mark as Spam