Apple has acquired a UK-based start-up whose artificial-intelligence software helps computers and people speak to each other in a more natural dialogue, according to people familiar with the deal.
VocalIQ uses machine learning to build virtual assistants that try to recreate the type of talking computers that appear in science-fiction films such as Samantha in Her or Jarvis in Iron Man. The deal marks Apple’s third acquisition of a UK company this year. 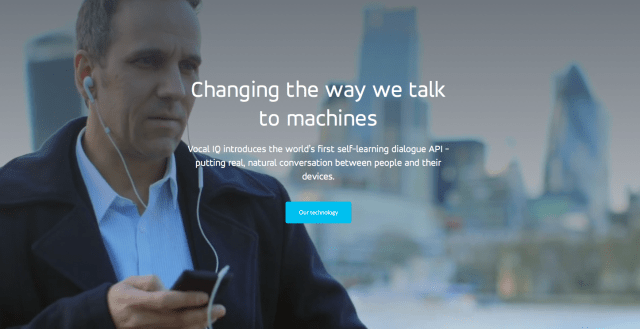 Presumably, Apple will use VocalIQ's technology to help improve Siri, it's digital personal assistant. Here's how the company describes its platform:

Since 2011, we've been working on the development of a smart platform that learns your natural conversation flow - and uses it to control your devices. Our aim is to augment and impact our experiences with machine interaction - changing every aspect of everyday lives. The foundations of our technologies are based on more than 10 years of academic research at the Spoken Dialogue Systems Group at University of Cambridge, UK and are driven by a team of world-class engineers, researchers and entrepreneurs.

VocalIQ has been critical of popular voice assistants such as Siri, calling it a toy.

"All major technology companies are pouring billions into building up of services like Siri, Google Now, Cortana and Alexa. Each was launched with a huge bang, promising great things but fell well short of consumer expectations. Some ended being used only as toys, like Siri. The rest, forgotten. Unsurprisingly."

Rather than using a "pre-programmed flow-chart based response that don't learn", VocalIQ claims to have developed the "world’s first self-learning dialogue API - putting real, natural conversation between people and their devices."

The team is expected to stay in Cambridge rather than move to the U.S.