Apple CEO Tim Cook talks about the company's philosophy in the second part of his interview with CNBC Mad Money host Jim Cramer.

"We produce products that give the people ability to do things that they couldn't do before. And in doing so, we helped change things," Cook said.

When questioned about the company's battle with the FBI over encryption, Cook noted that Apple opposed the demand that it create a backdoor into its devices because they believed it was best for America.

"I think government in general has gotten quite dysfunctional in the U.S. and in some other countries as well," Cook said. "What that does I believe is put more responsibility on the everyday citizen and companies to help promote change and improve things."

Take a look at the video interview below... 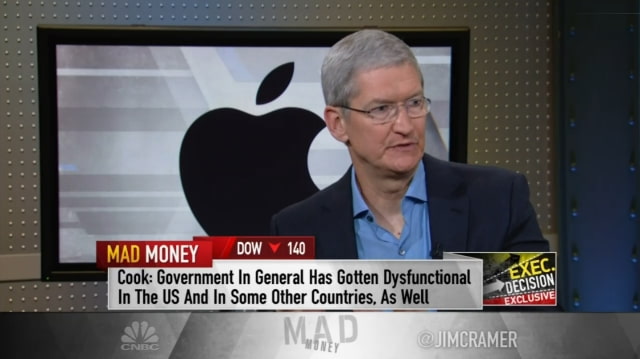 Tim vs FBI - May 7, 2016 at 4:52am
Apple stock plunged today thanks to apple CEO make a wrong decision and against the court order ..idiot
Reply · Like · Mark as Spam

clown - May 5, 2016 at 2:41pm
We also allow millions of products to be made overseas, because we required to pay to much in taxes. Because if we dont make many products overseas will be a failed company.
Reply · Like · Mark as Spam

Dude.... - May 4, 2016 at 2:17pm
I think it's people like him and Barry Obama that make this country dysfunctional. I don't buy into things easy like most people here
Reply · Like · Mark as Spam

He is not wrong, but... - May 4, 2016 at 11:18am
The U.S. Government is just the symptom. The U.S. People are the cause. No matter what Americans want to believe. That the politicians or the system or the cooperations are to blame. They have democracy. Meaning the people are to blame for everything.
Reply · Like · Mark as Spam
8 More Comments
Recent