Apple is working on a feature for OS X 10.12 that would let you unlock your Mac using Touch ID on the iPhone, reports MacRumors.

Apple engineers are designing an auto unlock function that would allow an iPhone to unlock a Mac when in close proximity, alleviating the need to enter a password on a password-protected Mac. The feature, which uses Bluetooth LE frameworks, will presumably work similarly to the automatic unlocking function on the Apple Watch, which allows an unlocked iPhone to bypass the passcode restriction on a connected Apple Watch.

The iPhone's Touch ID would likely be used as the login verification method. It's also possible that the Apple Watch could be used to unlock your Mac even when your iPhone isn't present.

Additionally, the new unlocking feature could work alongside Apple Pay support for web browsers with Touch ID on the iPhone being used to verify web purchases made on your Mac.

Apple is expected to unveil OS X 10.12 at WWDC in June; however, not all features for the operating system are set in stone and there is a chance the feature could be held back for a later date. It's also widely rumored that Apple will bring Siri to the Mac with OS X 10.12. 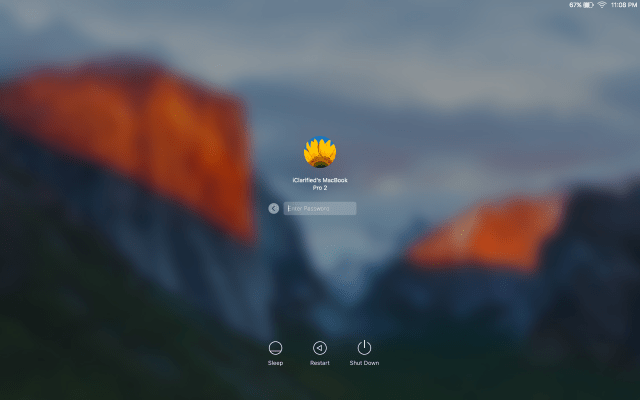 Chuck Andersen of Indarsin - May 23, 2016 at 1:26am
I have no problem with six-stared password, there is a keyboard in my Mac and after login I will typing anyway, so what the challenge?
Reply · Like · Mark as Spam

Amer Kechli - May 20, 2016 at 6:17pm
MacID is a great app that does all this and more but sometimes the Mac and iPhone loose connection when the iOS app is not running. If Apple built the features in iOS and Mac OS, this problem of loosing connection will be gone. MacID is going to be Sherlocked!
Reply · Like · Mark as Spam

Snowden - May 20, 2016 at 3:00pm
This is a great feature that I've been waiting to be native for a long time now. I use Near Lock, which basically do the same thing, and not only is it useful if you need to be frequently from your desk, but it also eliminate the chance someone looking over your shoulder and catching (part) of your password when typing your password.
Reply · Like · Mark as Spam