Apple's next generation smartwatch may be equipped with a GPS chip for accurate workout logging and gain the ability to tracking swimming, according to a 9to5Mac source.

The Apple Watch 2 is said to include GPS for accurate workout logging without the need to carry an iPhone, and the Workout app reportedly will gain the ability to track swimming – suggesting a higher level of waterproofing in the next Apple Watch.

While Apple has not declared the current Apple Watch waterproof, users have found that it holds up well in Splash, Shower, and Swimming tests.

The source of this information does not have a proven track record; however, the improvements do seem like a logical progression of Apple's plans. The iPhone 6s featured notable improvements in water resistance and rumor has it the iPhone 7 could be waterproof and dustproof as well. 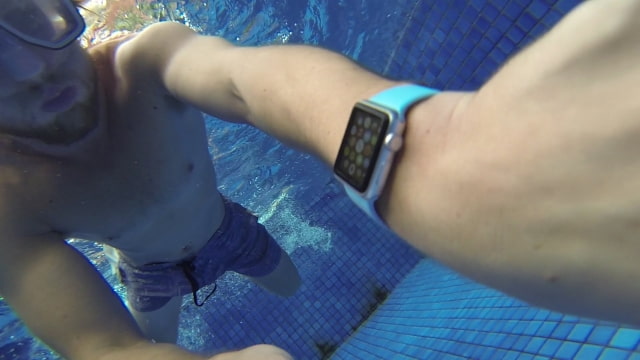 Andreassh - June 29, 2016 at 9:39am
Looking forward monitoring via Apple Watch not just user’s iPhone battery with the app like this: https://itunes.apple.com/us/app/watchmybattery/id1024068907 , but the gas-tank
Reply · Like · Mark as Spam

Mang Domeng - June 28, 2016 at 9:34am
All of the watches seem to be garbage to all of you. Look at Samsung Gear. That's a real garbage! They update every year with all kind of gimmicks but it flops! Apple watch is what? 3 years without any hardware update and will be more useful in the next OS update. The new watch os is amazing will make an old hardware new again without any hardware upgrades. We know everybody is frustrated in the 1st gen apple watch and its watchOS2, but is useful to some. Even the wheelchaired people will appreciate apple watch with the new watchOS 3 installed. If a new generation of Apple Watch will be released it will be a new template for other smart watches.
Reply · Like · Mark as Spam

One more thing - June 28, 2016 at 3:13pm
Oh you forgot one thing. These smartwatches are only good if you're using them as a digital watch (even though they have a shorter battery life than traditional watches). If only they'd work without a phone, and the apps made for them are actually useful, and if we can get MORE than a day or two of battery life, then I'd be up for them. Because for now, I've just been using my Apple Watch for time and getting notifications of phone notifications. Most other things have been kinda useless on Apple Watch (unless you're someone with a smart home setup).
Reply · Like · Mark as Spam

Mang Domeng - June 28, 2016 at 9:38pm
It will evolve. When the first gen iPhone was released it was not easily accepted at first. Nobody wanted them because it got less features built in it not like the competitor's that has everything built in the phone even if you don't need the feature. But now the iPhone became the template of all smartphones from product form factor to software functionality. The same with the Apple Watch, it is in its 1st generation but eventually it will evolve and will be the template again of all smartwatches. Let's see how this thing will work onb evolve.
Reply · Like · Mark as Spam
4 More Comments
Recent