Facebook has announced that it has begun testing end-to-end encryption in Messenger with a new featured called 'Secret Conversations'.

We are starting to test the ability to create one-to-one secret conversations in Messenger that will be end-to-end encrypted and which can only be read on one device of the person you’re communicating with. That means the messages are intended just for you and the other person — not anyone else, including us. Within a secret conversation, you can also choose to set a timer to control the length of time each message you send remains visible within the conversation. Our technology uses the Signal Protocol developed by Open Whisper Systems.

To keep the flexibility of continuing a conversation across multiple devices, starting a secret conversation with someone is optional. Secret conversations can only be read on one device and don’t currently support rich content like GIFs and videos, making payments, or other popular Messenger features.

Secret conversations are available to a limited amount of users right now but the option will become more widely available later this summer.

You can read more about the technical details here. 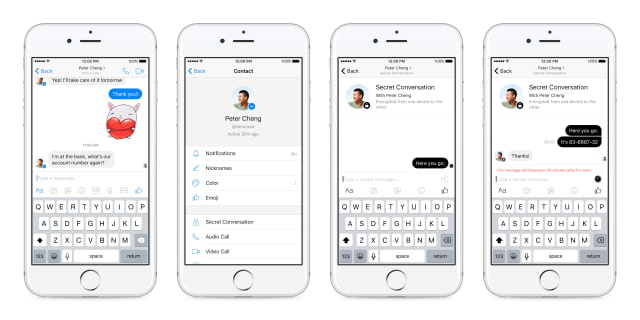