The iPhone 6s was the best selling smartphone in terms of shipments in 2016, reports IHS Markit. In the fourth quarter of 2016 alone, the iPhone 7 topped the list followed by the iPhone 7 Plus.

Apple again has demonstrated that its new iPhones integrate enough innovations and new features to drive sales and remain successful in the market. The company is also capable of selling older devices for an extended period of time. For instance, the year-old iPhone 6s and 6s Plus were both among the most-shipped models in 2016.

Samsung Galaxy S7 Edge and S7 ranked fifth and ninth, respectively. Sales of these two devices have outperformed their immediate predecessors, S6 and S6 Edge: the combined shipments of S7 and S7 Edge in 2016 were 10 million higher than S6 and S6 Edge over the same period. Samsung claimed five spots out of the top 10 most-shipped smartphones in 2016.

Huawei, the third largest smartphone maker after Apple and Samsung, did not have any models in the top 10 most-shipped smartphones in 2016. Chinese manufacturer OPPO had one model on the top ten ranking. 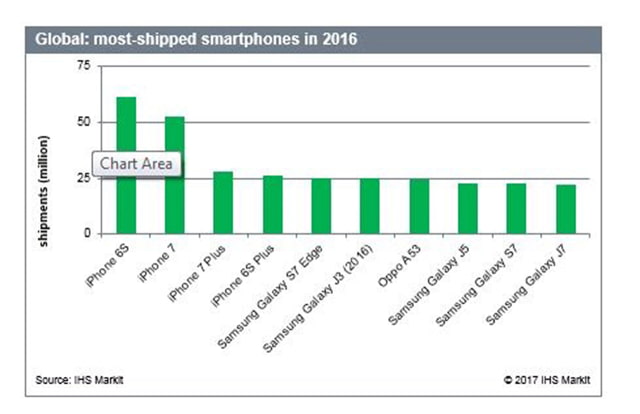 odedo1 - March 28, 2017 at 5:24am
I actually really miss my iPhone 6S, I can't put my finger on it but it was a better phone then the 7 which the only reason I got was because I'm on the Apple leasing program and the GB 256, even Apple now admits that they used cheaper parts on the 7 to save money for the upcoming Anniversary iPhone which is a lame excuse and they only admitted after iFixit opened and discovered all the cheap parts in the 7 compared to the 6S not to talk about the GB 30 7 which uses the worst memory chips available and also the cheap paint on the 7 is unbelievable for a company like Apple and now they have done it again with the 7 Red, they could have used powder coating paint which would have cost $1 extra per phone which we all gladly would have paid even so we shouldn't have for buying the most expensive phone, if you ask me this was the worst year for buying Apple products, I've been waiting so long for a new Mac Book Pro and got it right when it came out, returned it a week later, my 3 years old one is way better and even more powerful then the new one which I name the Dongle Pro ( courage is what they said when they took away the headphones plug from the phone so explain why they kept it on the new pro ) Also you can't connect the iPhone to iTunes because the cable don't fit, the touch strip is stupid because you need to take your eyes down from the screen, it should have been on the screen and the screen should have been a touch screen which is was requested buy almost everyone and for some reason other then Apple every other company have been using for years already so like I've said worst year for buying Apple, hopefully they will fix all the stupidity by the end of this year because as of right now I can't blame the millions that decided to leave Applem, I really really can't blame them and I hate this greed will kill Apple, it wouldn't have happened if Steve was still around!
Reply · Like · Mark as Spam

Paklan - March 23, 2017 at 10:43am
Most of the speaker system and headset in the market already set Bluetooth connection as standard. Headphone jack 3.5mm will surely die soon.
Reply · Like · Mark as Spam
Recent