A recent survey conducted by Verto Analytics found that nearly 25% of current Windows users plan to switch to Mac within 6 months.

And of those current Windows owners, consumers in the upper income bracket (those with an average income of $150,000 or more) showed the highest likelihood of switching to a Mac: 20% of respondents intended to switch. Lower income groups (those making $20,000 or less annually) also report higher probability of switching to Mac: about 14% of these respondents intended to switch. However, a further drilldown shows that these lower income respondents are also in their teens or twenties, suggesting parental assistance. 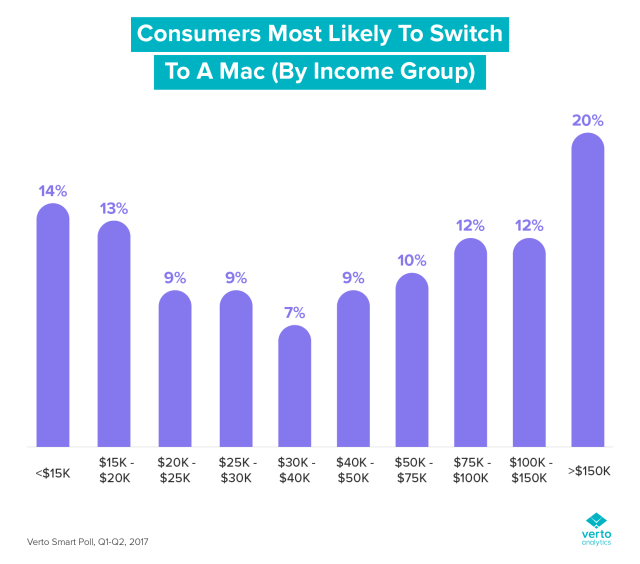 GeekBoy - June 30, 2017 at 12:47am
I tried working on a PC a while ago. OMFG what a stinking pile of crap. So much for "cross platform software". If Apple would make a machine you could game with I'd take a hammer to my PC faster than it takes to crash, again.
Reply · Like · Mark as Spam

Many Domeng - June 30, 2017 at 8:48pm
What a lame comment! Macs use solid state drives which makes boot time in seconds. Maybe you live in a cave and never came out. It is 2017 now and PCs and Macs have SSDs. The cheap-o PCs still run on HDDs. And those are the slow computers you say. Not a Mac! The latest Macs ditched the HDD and uses SSDs and FusionDrives their own version of Hybrid Storage).
Reply · Like · Mark as Spam
8 More Comments
Recent