Apple is allegedly underclocking the CPU of iPhones with degraded batteries to prevent unintended shutdowns and extend battery life, according to numerous reports on reddit.

You may remember that a year ago Apple instituted a battery replacement program after iPhone 6s users reported unexpected shutdowns. At that time they claimed only a small number of users were affected due a manufacturing issue. The company then released iOS 10.2.1 three months later which was mysteriously able to fix unexpected shutdowns for 80% of affected iPhone 6s devices and 70% of iPhone 6 devices. It now appears as though the company started underclocking the CPU in iOS 10.2.1 if a battery in poor condition was detected.

"The increased power draw of the A8 and A9 chips will make your phone shut down when you don’t have enough voltage," says TeckFire. "This gets around it, by lowering the clock speed, so you don’t have to replace your battery, and can continue using your phone. I just wish Apple would tell us about this."

Notably, even users with the iPhone 7 are reporting the same behavior; although, newer devices have efficiency cores which would make this less noticeable.

"I observed the same behaviour on an iPhone 7 (80% of design capacity). Fixed after replacing the battery," says goldcakes.

To determine if your device is being slowed down due to a degraded battery, download CPU DasherX (free) from the App Store and compare the CPU Frequency it displays with what's expected for your device.

Let us know if you've had a similar experience after replacing the battery on your device. Did performance improve? 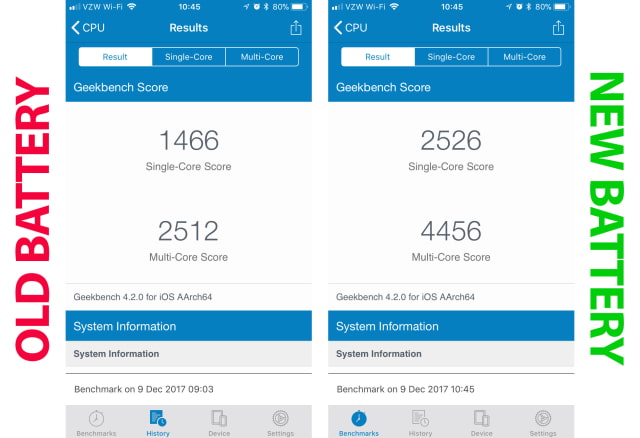 Robert - December 12, 2017 at 1:18pm
Drop performance , that is sad. I have my iphone 7 for a year and i'm chargeing it somewhere between 2-4 days. Aproximatly 150 cicles for the hole year. Now my phone is 2/3 in performance and i dont think my battery has degraded so much. Maybe 3-5% at most. Thats just unfair.
Reply · Like · Mark as Spam

CPup - December 11, 2017 at 5:24pm
I find it amazing that both battery tests were done at exactly 10:45 with exactly 80% battery. So... they what? They tested the old battery then shut down the phone, took it apart, replaced the battery, put it back together, rebooted it, then tested it again in less that 1 minute AND the battery levels happened to read the exact same? Result are a scam.
Reply · Like · Mark as Spam

Core99 - December 11, 2017 at 5:45pm
First screenshot is grabbed from history, second one from bechmarks, Sherlock.
Reply · Like · Mark as Spam
18 More Comments
Recent