The KPPLess jailbreak uses a modified version of comex's Substitute to provide functionality previously offered by saurik's Cydia Substrate. This means that most tweaks, apps, binaries will not work until updated. There is a compatibility list here. Make sure you check it before installing anything from Cydia.

Important Information
● An APFS snapshot is created of / so you may revert it at a later date if needed
● It is recommended to futurerestore if you have blobs before running Electra to ensure the best possible installation
● Cydia is included
● OpenSSH is running on port 22
● Electra repo added by default
● Substitute, Tweak Loader and Substrate Compatibility Layer available from Electra repo
● Many packages need to be updated for both Electra and iOS 11 (make sure they're updated before installing as they may not work yet)
● RocketBootstrap 1.0.6 or higher is required for use on iOS 11
● Many apps, launch daemons and installation binaries are broken as they require entitlements to be added

Warnings:
● Everything on saurik's repo right now is broken on iOS 11
● If you’re on iOS 11 and see an update for “APT 0.7 Strict”, or any package for that matter, that’s from saurik’s repo (Cydia/Telesphoreo) DO NOT UPDATE IT

Notably, saurik has criticized the use of a jailbreak daemon and says he is working with a well known developer to release a jailbreak of iOS 11.0 - 11.1.2 with a working Cydia and Cydia Substrate. Unfortunately, we don't have an ETA on when that will arrive.

If you want to try the Electra jailbreak, it can be downloaded from here. You can install on it on your device using Cydia Impactor and your Apple ID credentials. If you're not a developer you will only be able to sign the app for seven days after which you'll have to sign it with Cydia Impactor again. 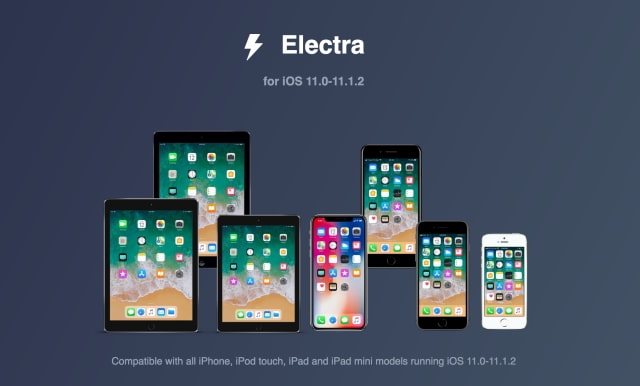 Dylan - March 1, 2018 at 5:16pm
That would imply not having to plug into a computer to install anything. That’s hasn’t been done in a long while. I’m guessing since the Green Poison days or possibly even iOS 8, but I thought that’s was a TaiG tether.
Reply · Like · Mark as Spam

Dylan - March 1, 2018 at 5:18pm
According to EverythingApplePro it’s running fine on his personal iPhone X. Couple minor UI hiccups with tweaks, but that’s understandable since some were developed before that phone came to market. Also don’t download anything from Saurik as it states. His Repo is DOA ATM, so only update the essentials for Cydia.
Reply · Like · Mark as Spam
13 More Comments
Recent