Internal documents reveal that Apple knew the iPhone 6 and iPhone 6 Plus were far more likely to bend than previous generation devices, reports Motherboard.

The documents surfaced in a class-action lawsuit that alleges Apple misled customers about touch disease. Apple was ordered to turn over internal testing documents and reports as part of discovery in the case. Although the documents are under seal, US District Court Judge Lucy Koh disclosed some of the information in a recent opinion.

Underscoring the point, one of the major concerns Apple identified prior to launch the iPhones was that they were "likely to bend more easily when compared to previous generations," 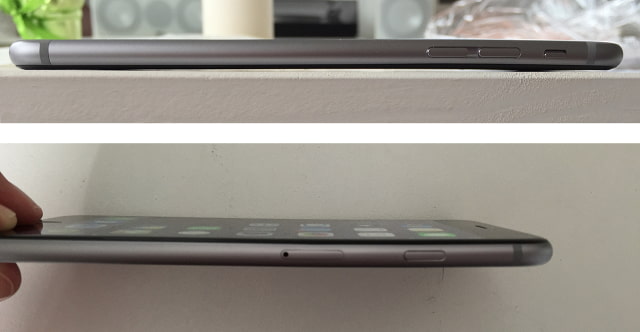 Despite knowing this, Apple released a statement to address Bendgate saying, "We chose these high-quality materials and construction very carefully for their strength and durability. We also perform rigorous tests throughout the entire development cycle including 3-point bending, pressure point cycling, sit, torsion, and user studies. iPhone 6 and iPhone 6 Plus meet or exceed all of our high-quality standards to endure everyday, real-life use."

Over time, slight bending of the iPhone 6 frame led to an issue known as touch disease. Users noticed a flickering gray bar at the top of their displays and their touchscreen would work intermittently or not at all.

Apple denies that bending of the logic board could cause touch disease, stating that "rigorous and comprehensive reliability test data proved that enclosure bending and twisting cannot cause the issue unless the phones had already been repeatedly dropped on a hard surface." However, in November 2016, Apple announced it would replace touch-diseased phones for $149; rather than the previous charge of $349.

Additionally, the company made engineering changes in May 2016 which it never acknowledged.

“After internal investigation, Apple determined underfill was necessary to resolve the problems caused by the defect,” Koh wrote, referring to an epoxy used to stiffen the logic board. “Apple had used underfill on the preceding iPhone generation but did not start using it on the [touch disease-related] chip in the iPhone 6 and iPhone 6 Plus until May 2016,” after millions of iPhones had been sold.

Judge Koh has denied the request for class action status saying that it was vague on how damages would be calculated and failed to show why certification would materially advance the litigation as a whole.

More details in the full order linked below.

the voice of reason - May 25, 2018 at 10:17pm
I really don't understand what the big deal is. I for one would never think of sitting on my phone and then being surprised if it's damaged. And the fact that it's weaker means nothing to me... for example I'm sure they also did studies that showed that glass is weaker than metal, but there's nothing nefarious if they make a glass phone. People want an elegant, light phone, obviously it will be delicate. Just my opinion, but people should be more reasonable in their expectations.
Reply · Like · Mark as Spam

iSheep - May 25, 2018 at 6:55pm
Lol keep paying Apple for their mistakes you idiot! Apple should at least fix their mistakes for free shouldn’t they? Just saying! :-) none of that I’ll fix it for a discounted price! Duhh!!
Reply · Like · Mark as Spam
1

iSheep - May 24, 2018 at 10:50pm
It’s funny how Apple knew about this and still push forward with #bendgate. Instead of replacing the flawed design for free! Apple still went ahead and charged their loyal sheeps! Cha Ching u dumb sheeps! Either way Apple’s going to make you pay for their mistakes. LMMFAO!
Reply · Like · Mark as Spam
1 More Comment
Recent