Apple has announced that iOS 12.1 introduces a new 'performance management' feature to the iPhone X, iPhone 8, and iPhone 8 Plus that slows down your device if a degraded battery is detected.

This is the same feature that was secretly introduced on the iPhone 6s and led to numerous class action lawsuits, investigations, and fines against the company. However, Apple says that due to the 'advanced hardware and software design' of the iPhone X, iPhone 8, and iPhone 8 Plus, performance management may be less noticeable. It has also provided a way for users to disable the feature under Battery Health in Settings.

For iPhone 6, iPhone 6 Plus, iPhone 6s, iPhone 6s Plus, iPhone SE, iPhone 7, and iPhone 7 Plus, iOS dynamically manages performance peaks to prevent the device from unexpectedly shutting down so that the iPhone can still be used. This performance management feature is specific to iPhone and does not apply to any other Apple products. Starting with iOS 12.1, iPhone 8, iPhone 8 Plus, and iPhone X include this feature, but performance management may be less noticeable due to their more advanced hardware and software design.

Performance management may result in:
● Longer app launch times
● Lower frame rates while scrolling
● Backlight dimming (which can be overridden in Control Center)
● Lower speaker volume by up to -3dB
● Gradual frame rate reductions in some apps
● During the most extreme cases, the camera flash will be disabled as visible in the camera UI
● Apps refreshing in background may require reloading upon launch

The introduction of performance management features for these devices is notable considering Apple told the U.S. Senate that the new iPhones contained hardware updates that would allow them to avoid unexpected shutdowns.

02/02/2018:
iPhone 8, iPhone 8 Plus, and iPhone X models include hardware updates that allow a more advanced performance management system that more precisely allows iOS to anticipate and avoid an unexpected shutdown.

More details in the support document linked below... 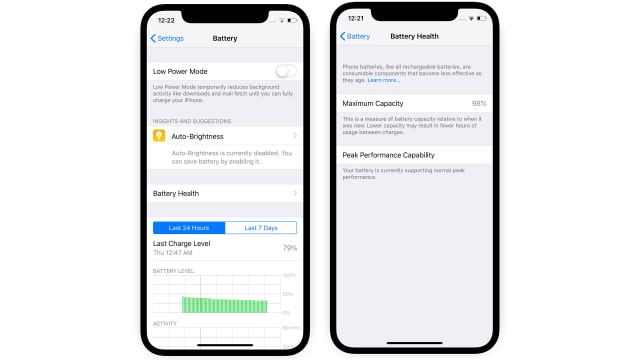 1reader - November 1, 2018 at 5:37pm
And this was like: go and upgrade, and stop complaining! We have to show to our investors good numbers in the next quarter.
Reply · Like · Mark as Spam

NoGoodNick - November 2, 2018 at 6:46pm
Except, due to the numerous outstanding performance issues, their sales have dropped significantly. In response to their own figures, Apple is now threatening to no longer track ANY unit sales, but Wall Street reacted, and while their profits are up, their stock took a one-day tank!
Reply · Like · Mark as Spam

1reader - November 2, 2018 at 8:30pm
Could that be because people got upset on their practice (high price for their products for 1 year of joy, then go buy the new one). They have to show some more love to their customers. People will probably buy them anyway but now they think twice or wait for better prices.
Reply · Like · Mark as Spam

NoGoodNick - November 3, 2018 at 1:52pm
Unfortunately, the numbers/stats don’t support that popular view. Clearly Apple users don’t have an issue spending significantly more for reliable products (their main positive attribute for Apple products). At the same time, Samsung, which has long pushed the ‘more features at cheaper prices’ has been struggling lately with much faster declines than Apple is facing. Given those conflicting stats, the strongest claim for this year’s falling iPhone sales are their outstanding unresolved issues, which counter Apple’s primary ‘reliable products’ marketing edge.
Reply · Like · Mark as Spam

1reader - November 5, 2018 at 9:13pm
Who said something about Samsung... we should be able to comment/complain about Apple and not directly jump to the competition. It’s like you have a favorite... we should be able to voice an opinion without going to the other side. They need to lower their prices and that’s it (it’s not like everything got so expensive and they need to recoup, but purely greed!)
Reply · Like · Mark as Spam
9 More Comments
Recent