Withings has announced that its Withings Sleep mat will now track and provide detailed information about breathing disturbances during the night.

The new feature acts as a first step towards Withings’ strategy to introduce even more advanced sleep diagnostics including sleep apnea detection, which affects 22 million Americans, 80% of whom are unaware they have the condition despite its potential for serious health impacts. Withings aims to add these capabilities by the end of 2019 subject to FDA and CE clearances. 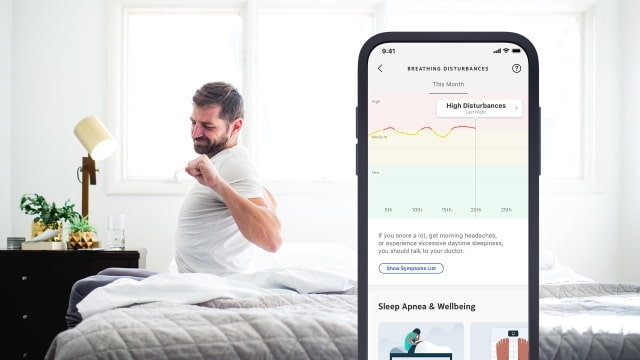 ----
Don’t Ignore the Snore!
Breathing disturbances are troubled breathing experiences in the night. They are fairly common but will mostly go unnoticed by people or attributed to annoying snoring which is usually deemed harmless. However, when disturbances become more frequent and intense, they can impair sleep quality and be a sign of chronic illness such as sleep apnea, cardiovascular issues and even depression. The new Withings Sleep breathing feature provides users with
an early warning system to allow them to identify hard to diagnose potential issues and where appropriate, seek medical advice.

Withings Sleep is a sleek and nonintrusive mat that fits seamlessly under the mattress and after a one- time setup automatically provides an in-depth look at users’ nights by monitoring sleep cycles, tracking heart rate and detecting snoring. The new feature monitors vital signs such as respiration and heart rate, as well as motion and snoring to track and chart the intensity of breathing disturbances throughout the night. The Health Mate App rates the intensity of those disturbances from low to high and provides monthly charts where people can visualize occurrences and take any necessary actions, such as seeking medical care.

The app also provides educational content around breathing disturbances and their impact on sleep quality and overall health issues such as blood pressure, fitness and weight. It also provides information on sleep apnea, its signs and correlation to more chronic conditions. By empowering people with data and information Withings aims to promote overall well-being and raise awareness on sleep apnea.

Breathing Disturbances, Sleep Apnea & The Impact of Health
Breathing disturbances become a significant issue as they become more frequent and intense and have the potential to be signs of a host of breathing-related sleep anomalies. These range from chronic or habitual snoring to upper airway resistance syndrome (UARS) to obesity hypoventilation syndrome (where people are not breathing sufficiently to oxygenate the blood) and sleep apnea.
Sleep apnea is one of the most common, yet largely undiagnosed potentially serious sleep condition. According to the National Sleep Foundation, it affects 22 million Americans, and 8 out of 10 of them are not aware they have it. It is an involuntary halting of breathing that occurs while a person is sleeping and can lead to the loss of the ability to recover properly during sleep resulting in excessive daytime sleepiness. When left untreated, it can lead to cardiovascular problems such as high blood pressure, chronic heart failure and atrial fibrillation. It is also associated with type 2 diabetes, obesity and depression and increases the risk of having a heart attack, stroke or premature death by 2 to 3 times.

“Despite its prevalence and serious consequences, sleep apnea goes largely undetected as current tests are confined to the clinical and sleep lab environment,” says Eric Carreel, President of Withings. “By allowing people to track the intensity of breathing disturbances, we are helping them identify warning signs early. This announcement is very important as it furthers our mission to bring medical grade analytics into the home and is the first step towards the medical certification of sleep apnea detection which we aim for by the end of this year.”
----- 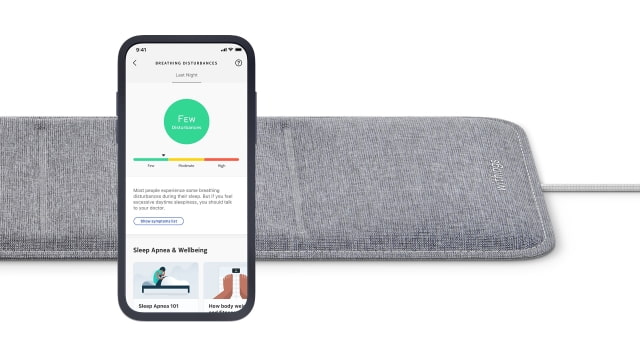 Availability
The new Breathing Disturbances feature is available starting today for all current and future users of Withings Sleep. You can purchase the mat from Amazon for $79.96. 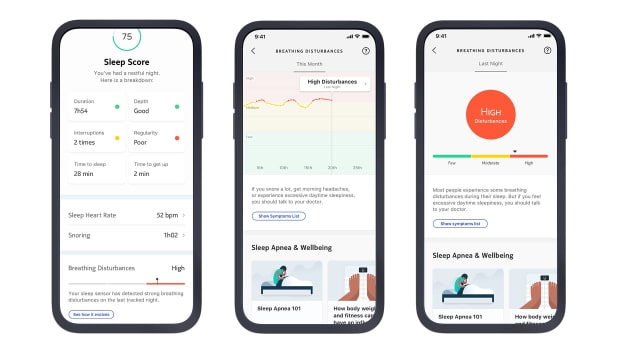