Canalys has cut its 2019 smartphone shipment forecast to 1.35 billion units, a year over year decline of 3.1%.

Due to the many uncertainties surrounding the US/China trade talks, the US Executive Order signed on 15 May and subsequent developments, Canalys has lowered its forecasts to reflect an uncertain future.

Canalys assumes that restrictions will be imposed stringently on Huawei, once the 90-day reprieve expires. This will have a significant impact on its ability to roll-out new devices in the short term. While the company is expected to take steps to mitigate the effect of component and service supply issues, its overseas potential will be hampered for some time. Eventually the U.S. and China could reach a trade deal but when this might happen is far from clear.

“We expect the other major smartphone vendors will have short-term opportunities while Huawei struggles. Samsung will be the biggest winner, thanks to its aggressive device strategy and its ability to quickly ramp up production, through the Korean firm may struggle to entirely fill the shortfall,” said Rushabh Doshi, Research Director, Canalys. “It will take other vendors until late 2019 to react to the new opportunities. Samsung’s control over component supply gives it a major advantage.”

Looking at 2020, Canalys anticipates that 5G and other hardware innovations will be positive drivers for demand and smartphone shipments are expected to return to soft growth, rising 3.4% to 1.39 billion shipments. 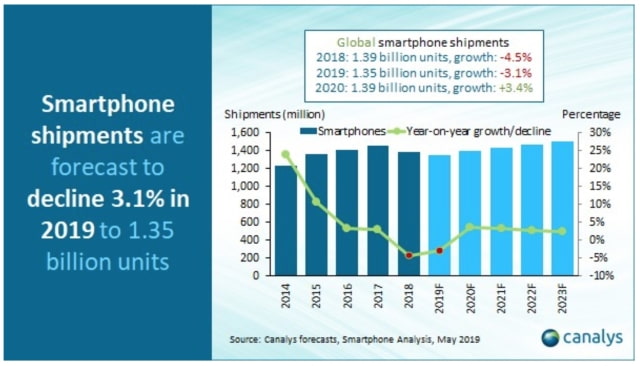