Consumer Reports is out with a new report comparing Apple's AirPods to the Samsung Galaxy Buds. According to the site, the AirPods didn't perform well enough to earn their recommendation.

The AirPods didn't score well enough in our tests to earn a Consumer Reports recommendation, but many people will find the sound perfectly acceptable. And the AirPods have a convenient case, work really well for phone calls, and make life easy for Apple users. But the controls are disappointing when you're using Android devices, and less functional than Galaxy Buds' controls in general.

Consumer Reports found that the AirPod's audio quality was acceptable but lacking bass. Although, their treble is described as detailed, the site said some delicate high sounds, like the vibrating hiss of a cymbal, come out smeared.

"The AirPods don’t sound terrible—far from it. But when you listen back-to-back with the Samsung Galaxy Buds, the difference is undeniable. You don’t have to be an audio snob to hear it." 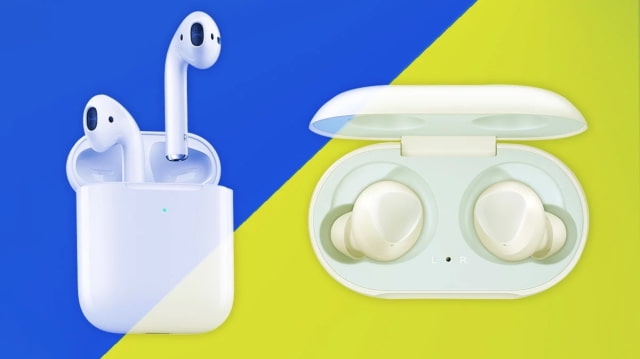 PaulieP - August 29, 2019 at 3:31pm
Consumer Reports puts a lot more time and money into their reviews versus some dude on YouTube who got a free item he/she can post a review. Reviews are all biased anyways.
Reply · Like · Mark as Spam

lo - August 30, 2019 at 3:50am
Well, prominent reviewers, plenty of them in yt, and it is free! you just said your point there (they spend money), I do not trust cr in general. That company is for business making money. Not for our interest.
Reply · Like · Mark as Spam

1reader - August 28, 2019 at 7:12pm
Because they still look ugly in people’s ears that’s why. They need to get back to design board and redesign them give them a fresh new look and everyone will buy them (also add noise canceling to them).
Reply · Like · Mark as Spam

PaulieP - August 28, 2019 at 4:55pm
There are plenty of other Bluetooth headphones that compete with the AirPods that are much more aggressively priced and offer the same or close to the same functionality.
Reply · Like · Mark as Spam
2 More Comments
Recent