The Base:Line playlist will have about 40 songs with a hip-hop vibe and will be refreshed weekly, Jeff Marsilio, the NBA’s senior vice president of new media distribution, said in an interview. The tracks will also be available on the NBA app and website, and will be used in game highlights shared on social media, the NBA said.

Apple SVP Eddy Cue was involved in the deal and said Apple is excited about the partnership and the playlist designed to support 'urban artists'.

--
Base:Line Playlist Editors' Note:
Succeeding as an independent musician outside of the traditional industry power structure is a lot like being on the basketball court: Sometimes you need to create your own shot. This playlist will surface the best emerging, independent talent bubbling up from outside the system. “When you are an indie artist, having your music on the right playlist at the right time is key,” says Apple Music's Ebro. “BASE:LINE is designed to be that key.” We regularly update this playlist. If you like a track, add it to your library.
--

Apple will maintain the playlist but man of the track come from UnitedMasters, a new label that connects about 190,000 independent artists to audiences via brand partnerships.

“There’s more supply than the conventional legacy labels can handle,” UnitedMasters founder Steve Stoute said in an interview. “Artists today are getting to audiences before getting to a record company.”

You can listen to the playlist here. More details in the full report linked below. 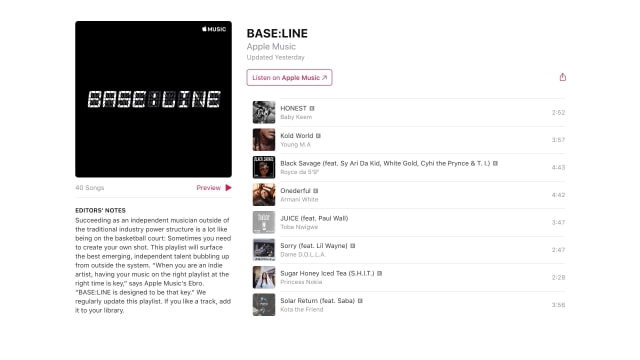