Apple and Xiaomi were the only smartphone vendors to achieve growth in the fourth quarter of 2019 as global smartphone sales declined by 0.4%, reports Gartner. Sales for the year declined by 1.0%.

“2019 ended a little better than expected, due to slightly improved performances from North America and emerging Asia/Pacific,” said Anshul Gupta, senior research analyst at Gartner. “However, India, which sold 151.9 million units, overtook the U.S. to become the No. 2 country for smartphone sales in 2019. China maintained the lead, with sales of 390.8 million smartphones over the full year.”

Despite a decline in sales, Samsung remained the number one smartphone vendor with 17.3% market share. Apple came in second place with 17.1% of the market. 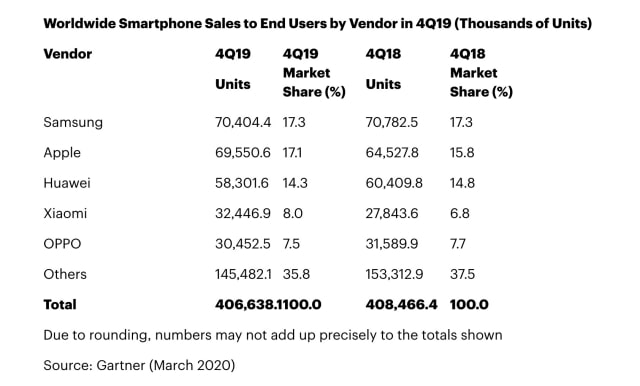 Gartner says that the iPhone returned to growth in 4Q19 after four consecutive quarters of decline. iPhone sales grew 39% in China and performed strongly in the U.K., France, Germany, Brazil and India.

“A slight lowering of the prices of the iPhone 11 series, compared with the iPhone XR, and other price reductions for previous-generation iPhone models, increased demand. It also helped Apple regain the No. 2 position,” said Annette Zimmermann, research vice president at Gartner.

“Looking forward, while the COVID-19 outbreak will impact smartphone demand negatively in China in the first quarter of 2020, we do not expect a demand contraction in the international smartphone market during that period,” said Ms. Zimmermann. 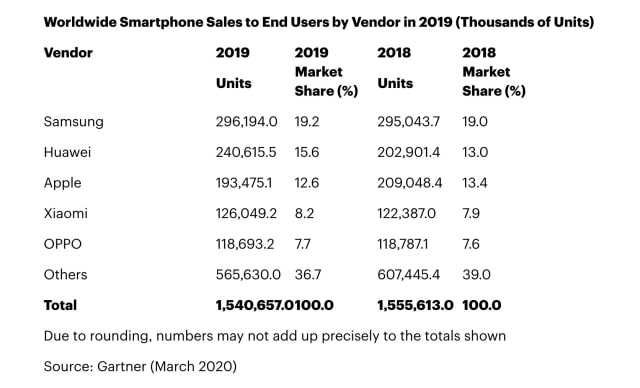