The popular Homebrew package manager has been updated with support for Apple Silicon and M1 Macs.

Today I’d like to announce Homebrew 3.0.0. The most significant changes since 2.7.0 are official Apple Silicon support and a new bottle format in formulae.

"Thanks to all our hard-working maintainers, contributors, sponsors and supporters for getting us this far. Particular thanks on Homebrew 3.0.0 go to MacStadium and Apple for providing us with a lot of Apple Silicon hardware and Cassidy from Apple for helping us in many ways with this migration. Enjoy using Homebrew!"

Major changes and deprecations since 2.7.0:
● Apple Silicon is now officially supported for installations in /opt/homebrew. formulae.brew.sh formula pages indicate for which platforms bottles (binary packages) are provided and therefore whether they are supported by Homebrew. Homebrew doesn’t (yet) provide bottles for all packages on Apple Silicon that we do on Intel x86_64 but we welcome your help in doing so. Rosetta 2 on Apple Silicon still provides support for Intel x86_64 in /usr/local.
● brew bottle and bottle do blocks use a new syntax format (one :cellar per platform). brew style --fix will autocorrect formulae to this new format. This will allow more bottles to be relocatable.
● The new HOMEBREW_BOOTSNAP environment variable allows the use of the Bootsnap gem to speed up repeated brew calls. This does not work (yet) on Apple Silicon or using Homebrew’s portable Ruby.
● Various methods have been deprecated, disabled and removed
● Bash, fish and zsh completions are generated automatically from the CLI::Parser DSL. This will ensure they are kept up-to-date.
● brew update better handles upstream branch renames (e.g. from master to main)
● brew completions is a new command to opt-in to completions provided by third-party taps

Other changes
● Command usage text is automatically generated (so will be kept-up-to-date)
● brew audit reads more formula data from taps
● brew untap of an official tap you don’t use (e.g. Homebrew/homebrew-cask) will ensure it’s no longer automatically retapped
● brew casks is a new command implemented in Bash to speedily output all casks available to install (like brew formulae)
● brew info --cask --json=v2 includes whether a cask is outdated and the currently installed versions
● Fixed a bug where brew update could be run every time
● brew --prefix --installed is a new flag to brew --prefix that will fail if the requested formula is not installed
● We now use an unversioned SDK path on Big Sur to avoid breakage on minor SDK version changes

Hit the link below for more details. 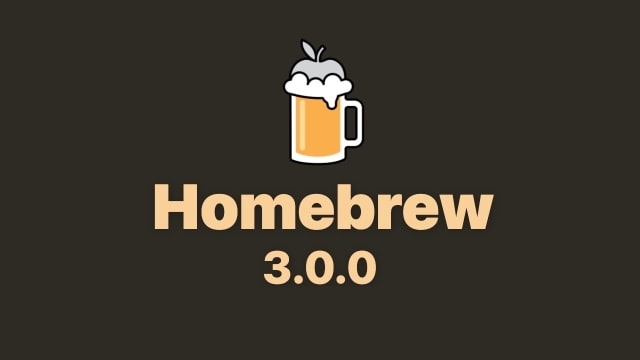