The notch on Apple's new MacBook Pro is causing several UI issues for users with many menubar items.

The problems were demonstrated in a couple videos posted by Quinn Nelson.

"I can't even believe this is real. So, oh my gosh. A lot of people have been asking and wondering with the notch in the way now, what happens if your app menus go too far to the right or your status menus go too far to the left. Do they like you know get smaller or do they jump to the other side, or are they scrollable? The answer is frickin nothing! If I turn on iStat menus, look at that, there is stuff behind the menubar [notch] that I can't see!"

Additionally, in certain circumstances the mouse cursor will not allow you to travel under the notch and if you have an app that has numerous menu items, it just hides the menubar items on right. It's likely that Apple will address these issues in a future software update.

The 14-inch and 16-inch MacBook Pro with M1 Pro/Max chips were just released yesterday. There is a significant shipping delay on Apple's online store for most models. Amazon is sold out of many configurations as well; however, there are still a few you can grab at $49.01 off. 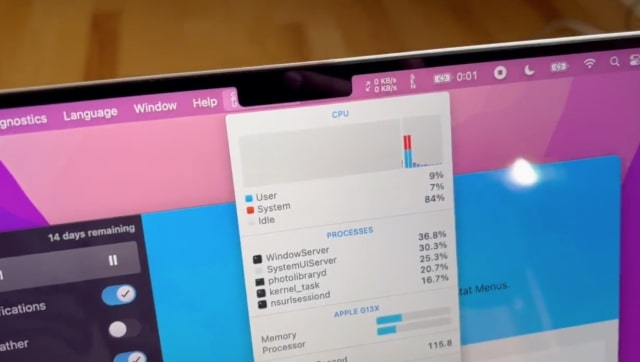 A-Non-E-Moose - October 27, 2021 at 3:29pm
Not a big problem. It seems it’s a niche problems app to app and it is up to the devs to figure it out. IStats is not used widely, and if it is used, it’s not for long to be a serious issue with the notch. Guy seems to be on crack though with his high pitch crackles and zoomie-like mouse movements. He only found two examples but tries to clickbait the f*** out of it
Reply · Like · Mark as Spam