The Fisheye-Hemi Plug-In filter set provides correction for hemispheric fisheye lens distortion, working seamlessly within Aperture's photo editing and management environment. Photographers can now easily preserve a normal view of people by not distorting their faces and bodies, as the plug-in straightens vertical lines. Fisheye-Hemi Plug-In uses almost all of the pixel data in that view with no loss of image resolution while displaying the intended composition and framing better than other un-warping programs.

“The Fisheye-Hemi Plug-In offers quick and effortless correction of fisheye lens distortion directly within user's Aperture image library,” said Dan Sullivan, president and CEO of Image Trends, Inc. “Our objective is to quickly provide our other unique workflow productivity tools in Aperture 2.1 versions. We plan to offer PearlyWhites and ShineOff Aperture Plug-Ins within the next 60 days with other products to follow.” 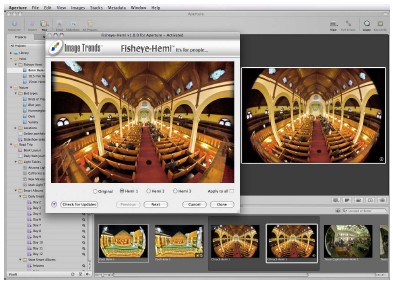