Microsoft and Adobe recently held a secretive meeting to discuss a partnership and possible acquisition of Adobe by Microsoft to fight Apple's growing control of the mobile market, according to the New York Times.

The meeting, which lasted over an hour, covered a number of topics, but one of the main thrusts of the discussion was Apple and its control of the mobile phone market and how the two companies could partner in the battle against Apple. A possible acquisition of Adobe by Microsoft were among the options.

Microsoft was reportedly in talks to purchase Adobe several years ago; however, antitrust concerns halted any progress. With Apple and Google emerging as giants in their own right, an acquisition may be back on the table.

Adobe's stock has skyrocketed as a result of the rumor. 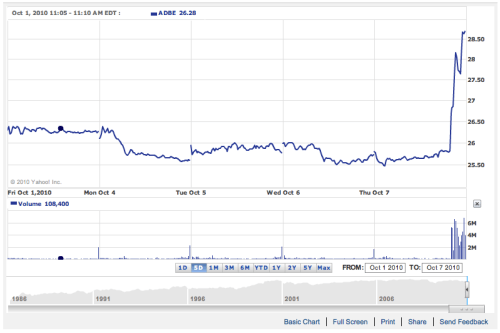 matrixmaniac - October 7, 2010 at 5:07pm
Ha ha, after the merger they will call themselves MICROBE! Woahaha!!
Reply · Like · Mark as Spam