Android Market is expected to overtake Apple's App Store in size by August 2011, according to research2guidance.

On the contrary, the success of an app store is negatively correlated to the success of an average developer. All analysis on the early months of an app store including the Android Market shows that average download numbers decrease dramatically after the first months or even weeks after the launch of the store. The long tail gets longer and longer while the top 5% gets richer and richer. 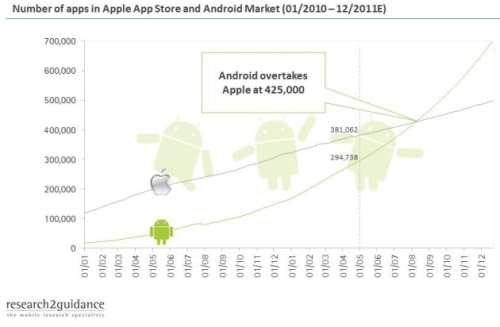 Posted From my Galaxy S 4g - May 5, 2011 at 7:05pm
Too bad most of the apps in the android market are junk. On top of that, many of my android apps crash and/or force me to reboot. Even Words with Friends is Junk, how do you mess that up so bad? Only real benefit of Android is the 4G network that comes with it.. can\'t wait for the ATT/T-mobile merger so I can finally get my iPhone back, this time on 4G (hopefully).
Reply · Like · Mark as Spam

Murat K. - May 5, 2011 at 6:45pm
Stupid expectation. Research2guidance must do some actual \"research\" before making expectations like this one.
Reply · Like · Mark as Spam