T-Mobile has filed an amicus curiae ('friend of the court') brief in support of Samsung against Apple, reports FOSS Patents. The company is hoping to prevent Apple's request for a US-wide preliminary injunction prohibiting the sale of numerous Samsung devices.

T-Mobile also filed a formal request for permission to be admitted to the proceedings as a third party and a motion to shorten time in order to ensure that the court will decide on the admission of T-Mobile ahead of the scheduled Apple hearing on October 13th.

FOSS Patents notes that the similarities between Verizon's brief and T-Mobile's are striking; however, T-Mobile does not limit its arguments to the software patents but also includes the design patents.

"T-Mobile's public interest arguments, however, apply to all the asserted patents, including the Design Patents." 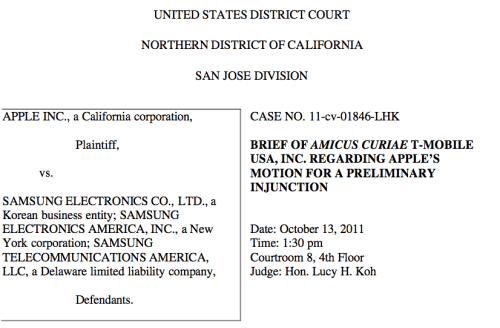 Zz - September 29, 2011 at 11:21am
Looks like apple has more enemies than friends. That what happens whe you want to get too powerful.
Reply · Like · Mark as Spam

Unhandsome_scurvy_boy ^__^ - September 29, 2011 at 6:10am
Now T-mobile are jumping on the anti-apple bandwagon? Just cuz Steve doesn't offer the iPhone on your shit network....or they running scared in case the samsung ban happens ?
Reply · Like · Mark as Spam

Your a Dumbass. - September 29, 2011 at 1:06pm
No one gives fuck what you think. Do you have to reply to every article that is posted?
Reply · Like · Mark as Spam
3 More Comments
Recent