Empoc has announced the release of Screen Vault, a new application for Mac OS X. Screen Vault is an application made specifically for OS X and provides a brand new stylish way for customers to lock and unlock their Mac.

The idea for Screen Vault was first realized by Chris while thinking about new, never before seen ways to interactively lock / unlock your Mac. Thinking of different types of locking mechanisms and currently available technology sparked the idea for a combination lock that could be controlled via the rotate gesture of the track pad that is built into MacBooks as well as the Magic Track pad that is available for iMacs and Mac Mini's


Please see below for a full list of features.

* Themes: Change the look of Screen Vault by changing the graphics and text using the built in Theme Designer.

* Unlock Options: Unlock your mac using a combination lock by utilizing the rotate gesture of your track pad or use a pass pattern seen on most Android phones.

* Intruder Snap Shots: Screen Vault can be setup to automatically take snap shots of intruders when they try to unlock your mac with an incorrect combination or pass pattern.

* Intruder Video Recording: Screen Vault can be setup to automatically start recording the second someone tries to unlock your mac with an incorrect combination or pass pattern.

* Video Surveillance: Screen Vault can be setup to automatically start recording video as soon as you lock your mac. A useful feature if you want to know what's going on while you're away.

* iTunes Info & Controls: Control what song is playing in iTunes while your screen is locked or view information about the current song that's playing. iTunes controls and info are widgets that can be turned on or off in preferences.

* Snapshot & Video Log: A built in log that allows you to easily view snapshots and video footage of intrusions.

Pricing and Availability:
All in all, Screen Vault is a great addition to an already amazing operating system and will make the overall user experience more enjoyable. If you haven't already, go ahead and give Screen Vault a try. Screen Vault 1.0 is $4.99 USD (or equivalent amount in other currencies) and available worldwide through the Mac App Store in the Utilities category. 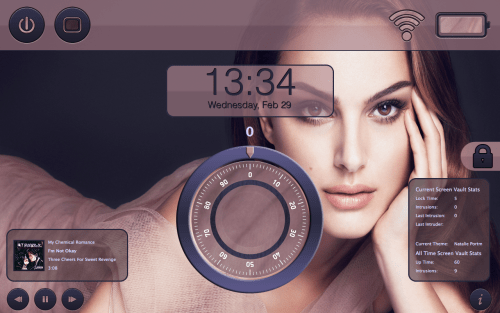 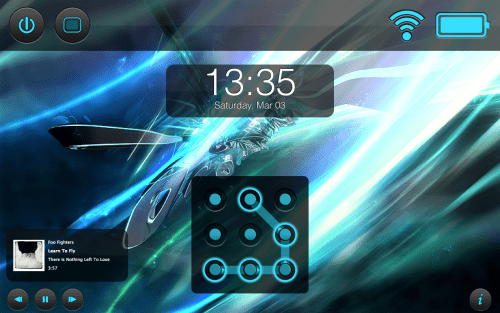 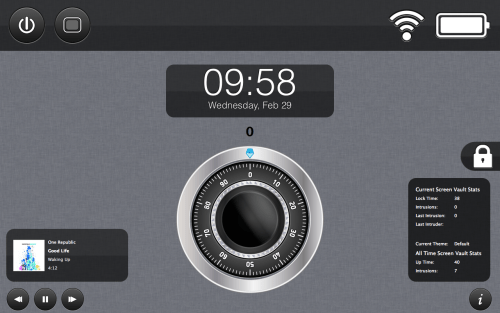 Sasha - March 14, 2012 at 8:41pm
Shit Mac App Store won't let me rate or put a review comment so I'll post it here. >>>>>>>>>>>>>>>>>>>>>>>>>>>>>>>>Okay first off I would like to say I like this program it somewhat works it's got some bugs some major ones first thing up when you enable the iTunes control it push's you to full-screen iTunes cause I have my iTunes in full screen anyway and then I can't get back to the lock screen or anything I have to powerdown & power backup and the program doesn't seem to launch up at start which was good for me lol. also there's a nice little bug when it comes to locking your screen I just got locked out :-( one time is too much. It locked me out and the pattern option was in operable I had to powerdown & power backup and videos don't seem to play after they record my camera light didn't even light up but the videos... they do take videos I just can't watch them when I go into the log it just won't do anything? & my first video had an error so I don't know bug who knows? So ya so I will be waiting for updates and I will not delete this at all i really like this app it is a great idea. I'll give it one star but I will up it to 5 when the getting locked out of a screen lock app is fixed lol Cuz that just defeats the purpose but I really commend the developers great idea keep up the good work and this is a five-star app just fix up getting me locked out of my screen lol. Funny but you know I just downloaded an app last night that does just that locks your screen and I like it... till I saw this app I love this app and I will wait for you guys to fix it I won't even reinstall the other app that's how much I like this app!!!
Reply · Like · Mark as Spam
Recent