A look at 100,000 Mac computers reveals that 20% of them carry Windows malware, according to report from Sophos.

A 100,000 strong snapshot of the millions of Mac computers which have recently downloaded Sophos's free Mac anti-virus software, revealed that 20% of Mac computers were carrying one or more instances of Windows malware.

Although Windows malware on Macs won't cause symptoms (unless users also run Windows on their computer), it can still be spread to others.

More disturbingly, Sophos's analysis also shows that 2.7% (one in 36) of Macs which downloaded the free anti-virus product were found to be infected by Mac OS X malware.

Recently, the Flashback trojan made headlines after it was estimated to have infected over 600,000 Macs. 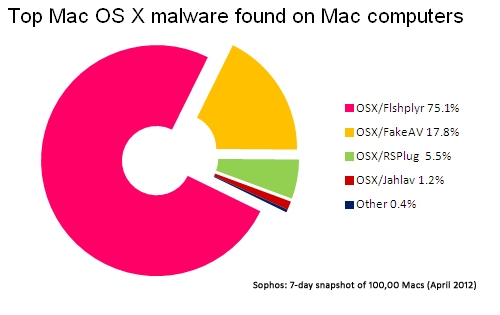