Perian, a free open source QuickTime component that adds native support for many popular video formats, is coming to an end.

Its developers have posted the following notice on their homepage.

---
We began the Perian project over 6 years ago. We wanted to simplify viewing your content. Our team has attained that goal and with that in mind, Perian will be retired soon. Our stewardship has been a blast but it's time for all of us to move on.

From the beginning we kept Perian simple. Our preferences were minimal, updating was easy, and we gradually grew the product to add in extras like subtitles and different formats. We've contributed a lot. Today, Perian stands as complete as it ever will be under our stewardship.

There are some projects that we never got to. As an example, we would have liked an official, flexible, and well-documented import API to speed up MKV. We hit a brick wall there. Still, we reached a great stopping point and Perian's installed userbase proves how valuable this tool became to so many people.

Starting 90 days after the final Perian release, we will no longer provide support. We'll wrap up our loose ends, pack up our bags, and move on to new and exciting projects.

Here's what our roadmap looks like:
● We will soon release the final version of Perian, including all the fixes we've worked on since the last release. It may -- or may not -- work on 10.8.
● We will post the source code to either Google Code or Github.

Here's what we're looking for from you, our users
● Download Niceplayer , it's pretty great -- and those folks are doing a fantastic job.
● Support each other on our Google Group list . We mean this. Just because we aren't helping anymore on a regular basis, that doesn't mean that you can't.
● Are you a developer? Pick up where we left off. Join us on #perian on irc.freenode.net. Yeah, we're all pretty busy -- so stick around after asking your question. You may have to wait a bit for an answer. Chalk it up to asynchronous tech support.
● Want to donate? We appreciate the thought. It's hard times these days and your money will make a bigger impact elsewhere. Consider Child's Play , Ronald McDonald House , or the EFF . We no longer accept donations.

A final word: If and when Perian stops working, try looking into VLC or MPlayer OS X. Sure, they're not Perian, but they offer great software still under development.

Thanks for all of your support over the years. It has meant a lot to all of us.

PS We would like to thank Erica Sadun for helping us write this letter, and for general guidance.
---

This is really unfortunate news since Perian is a must have for any OS X user. Hopefully someone will take up the project and keep Perian alive. 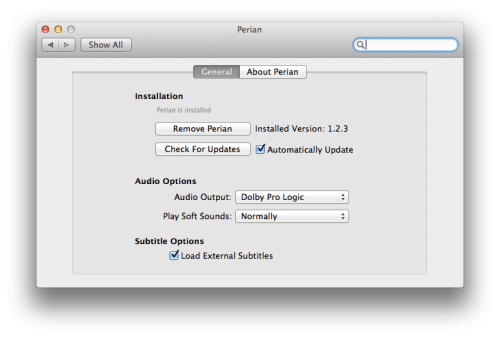 ratGT - May 16, 2012 at 1:07am
Nooooooooooooooooo!!! This top-3-must-have Mac OS X utility needs a more safe, future-proof handling before being abandoned! PLEASE don't let it end up having the same fate as the legendary and irreplaceable VisualHub!!!
Reply · Like · Mark as Spam
0