The petition to make cell phone unlocking legal has reached the required 100,000 signatures to receive a White House response.

Here's the details of the petition:

---
Make Unlocking Cell Phones Legal.
The Librarian of Congress decided in October 2012 that unlocking of cell phones would be removed from the exceptions to the DMCA. As of January 26, consumers will no longer be able unlock their phones for use on a different network without carrier permission, even after their contract has expired.

Consumers will be forced to pay exorbitant roaming fees to make calls while traveling abroad. It reduces consumer choice, and decreases the resale value of devices that consumers have paid for in full. The Librarian noted that carriers are offering more unlocked phones at present, but the great majority of phones sold are still locked.

We ask that the White House ask the Librarian of Congress to rescind this decision, and failing that, champion a bill that makes unlocking permanently legal.
---

Hopefully, this petition will help draw attention to the issue and help reverse the ridiculous decision that made unlocking cell phones illegal. 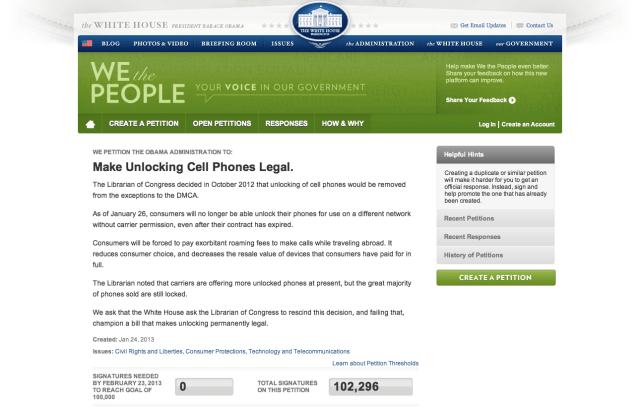 DAvidF - February 23, 2013 at 2:34am
Hey DavidG Why are you called someone Dumass ? It's matter of people opinion right? You DavidG you must vote for Obama ! That why every time people mention the name Obama you got offensive ! I don't like you told people "did you go school so on and so on " educated person never name calling"
Reply · Like · Mark as Spam

unixes - February 22, 2013 at 12:02pm
You people are wrong. Legally yes, you can do what you want with your phone,because you bought that device, but not the network, the operating system, etc. So if they want, you can stuck with the same nerwork as much time as they want.
Reply · Like · Mark as Spam

FukStupidGovernment - February 22, 2013 at 5:56pm
Only if idiots like u let allow them to tell u what to do. If we get together and tell them to make better laws that make sense, they have no choice but to listen. Got it?
Reply · Like · Mark as Spam

squeaky - February 28, 2013 at 6:38am
to unixes .. am i to understand you correctly in saying i haven't paid for the operating system ? well i fuc#### paid for mine the ones on my phone and the ones on my computers. so if i want to change internet , (cellular ) or operating systems mac,,windows or linix ,android , or ios regardless of the device ... ( ITS FUC#### MINE I'LL DO WHATEVER I WANT TO WITH IT) and to the government we have in power who allow stupid laws which is most of them to slowly take everything that makes or made America great i say. **** you are you smart enough to figure out what i meant squeaky
Reply · Like · Mark as Spam
12 More Comments
Recent