Apple is reportedly behind schedule with iOS 7 and has apparently pulled developers from OS X 10.9 to help get the mobile operating system ready, according to Daring Fireball's John Gruber.

In a decision thread on Branch, several journalists shared whispers they have been hearing about Apple's plans.

Gruber notes that the revamp to iOS is significant enough that "iOS engineers with carry privileges all have some sort of polarizing filter on their iPhone displays, such that it greatly decreases viewing angles, thus making it difficult for observers to see the apparently rather significant system-wide UI overhaul."

Additionally, Ritchies says that he's "heard from several sources that there was/is an event planned for April, new 9.7 inch iPad if it's ready. Also still hearing iPhone 5S for August (though a lot of other people are saying July, so maybe it's more of a window than a date for now)."

The thought is that iOS 7 could be released alongside the iPhone 5S in order to offset its minor hardware changes. MG Siegler says, "Since we're talking whispers, the one thing I've heard multiple times now is about some sort of biometric scanner on the new iPhone. Perhaps not surprising given the AuthenTec buy — but surprised it would be this soon."

You can check out the thread at the link below... 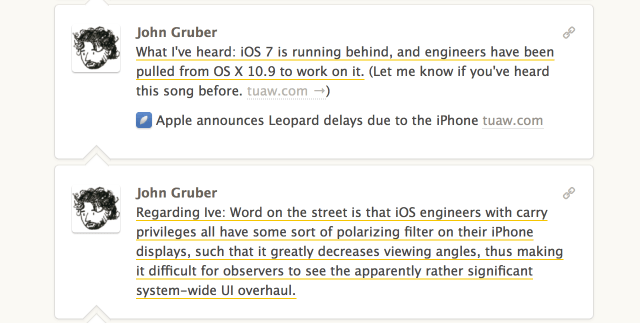 Sam - April 3, 2013 at 3:10pm
Whatever they do to the iOS, here's hoping its just terrific. I'd like to see some significant changes, not loosing the simplicity and the elegant feel though.
Reply · Like · Mark as Spam
1

Goebes - April 3, 2013 at 2:23pm
How could iOS possibly be behind? All they will probably add are one or two things that have been available via a jailbreak months ago and it's not as if they are about to change the same UI which they've been using since day one are they? When jobs died the apple slowly started to go brown...
Reply · Like · Mark as Spam

Dyllon - April 3, 2013 at 4:51pm
Are you idiot, can you not read. They wanted be using a polarized filter that reduces viewing angle if they weren't changing something drastically I know that people would notice just by glancing... Tim Cook isn't Steve Jobs Tim Cook wants a huge change so he can make the iPhone his Plus he needs something to offset the minor hardware changes in the 5s so he can squeeze every penny out of that
Reply · Like · Mark as Spam

Space - April 4, 2013 at 3:54am
Try using English. It's hard to read when you just write in one long unbroken sentence that stops making sense.
Reply · Like · Mark as Spam

crazyone - April 3, 2013 at 8:56am
I wish that these Rumors should get 100% right like the way iPhone 5 rumors were, I'm so addicted with iPhone cant leave the ecosystem, but feeling bore with same UI as always
Reply · Like · Mark as Spam
10 More Comments
Recent