Ok, I hate redsn0w, I hate sn0wbreeze, and I hate 6.1.3. I'm ready to get this #openjailbreak off the ground

Elaborating further he told iFans that, “Essentially it’s going to be a repository of open source jailbreak components that I created over the years. So much of my code has been hacked up and incorporated into other projects, it’s becoming very fragmented. There’s no central repository to maintain all this code, to allow other developers to submit patches or help layout a roadmap for what new features and abilities will be added in the future.”

Surenix is reportedly working on the development of the website for the repository and Hill is organizing that components that will be posted.

Hill also says "this is just a small part of an ultimate plan" perhaps eluding to another recent tweet which said, "I got a lot of amazing things coming to you all soon. think bigger than jailbreak ;)"

Notably, developer Ryan Petrich posted an image on Twitter earlier today which appears to indicate that there already is a jailbreak for iOS 7. 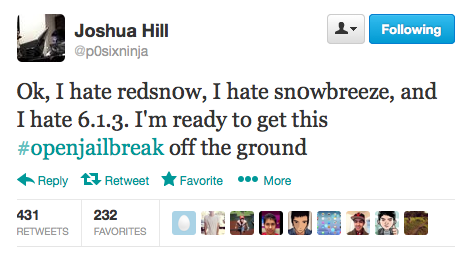 NOrman - July 1, 2013 at 9:52am
Same here - first time ever not too keen on upgrading the OS, maybe when Classic Theme is available on Winterboard :) First time ever needing that kind of JB-app to make the phone bearable.
Reply · Like · Mark as Spam

the REAL NoGoodNick - July 2, 2013 at 1:56am
Don't worry, someone is bound to create a Winterboard theme that looks like the "Classic" design.
Reply · Like · Mark as Spam
6 More Comments
Recent