Apple continues making gains in U.S. market share at the expense of Android and BlackBerry, according to a comScore report that looked at the three months ending August 31st.

Smartphone OEM Market Share
145 million people in the U.S. owned smartphones (60.8 percent mobile market penetration) during the three months ending in August, up 3 percent since May. Apple ranked as the top OEM with 40.7 percent of U.S. smartphone subscribers (up 1.5 percentage points from May). Samsung ranked second with 24.3 percent market share (up 1.3 percentage points), followed by HTC with 7.4 percent, Motorola with 6.9 percent and LG with 6.7 percent. 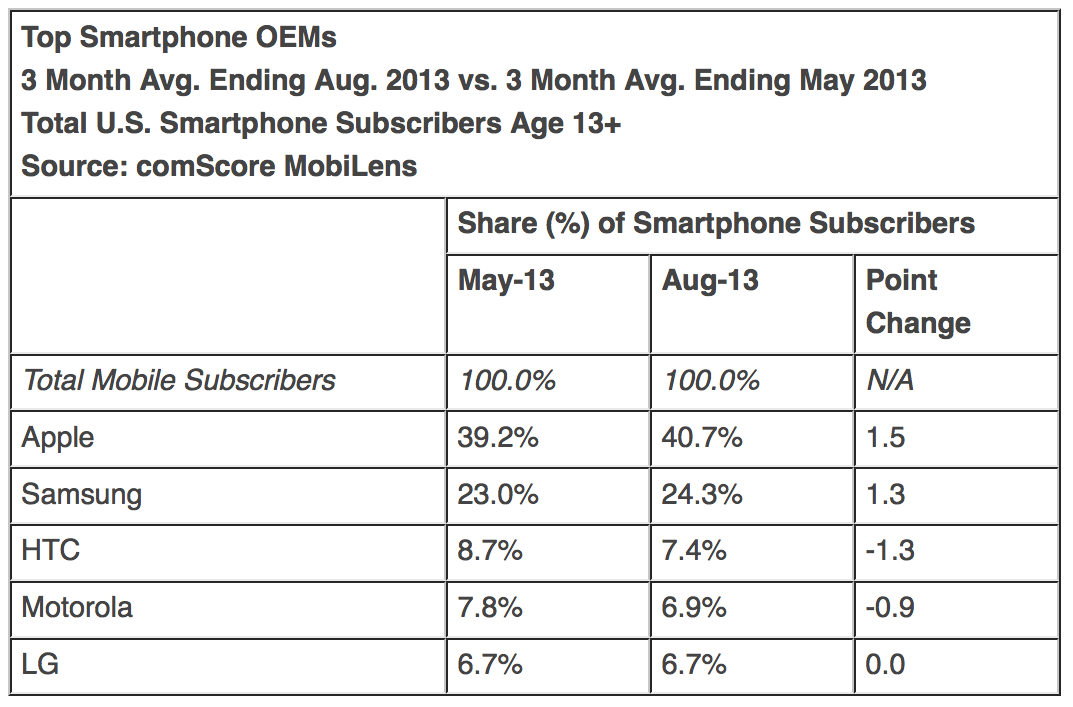 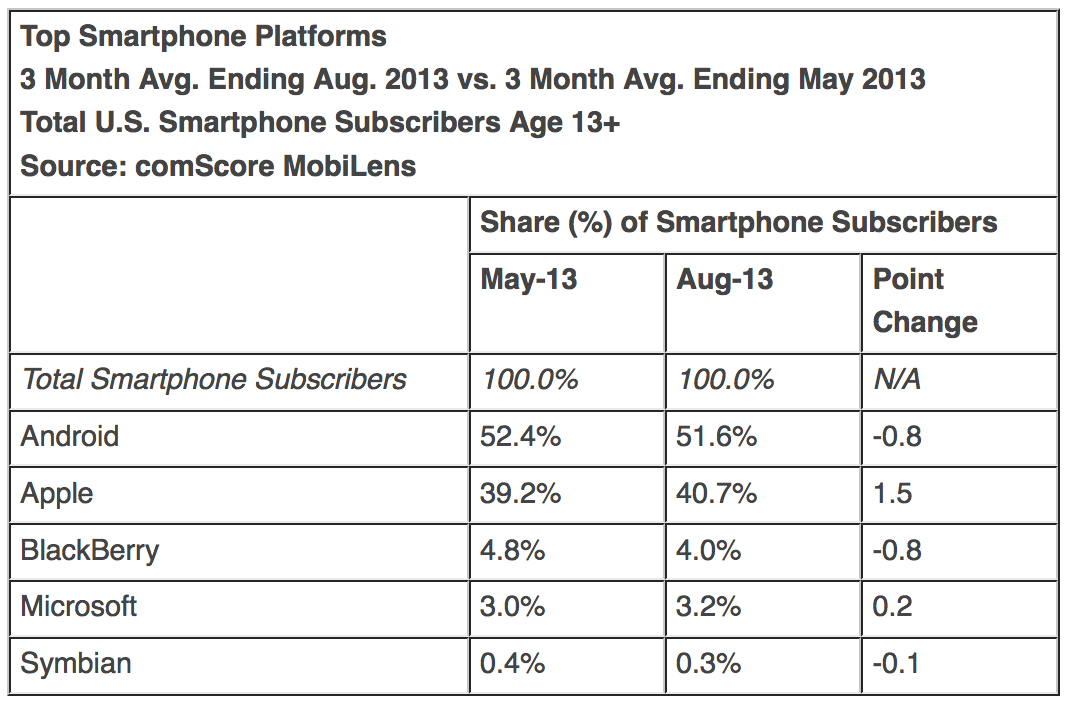 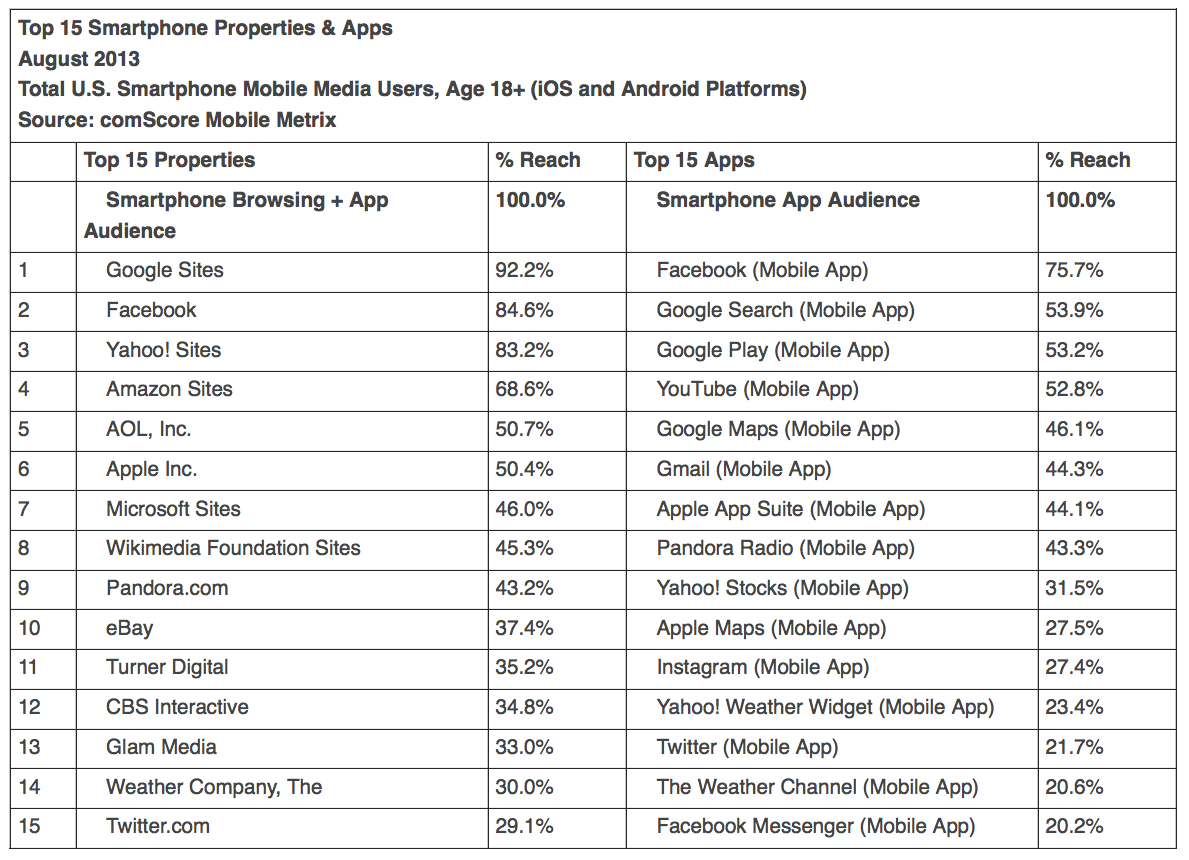 iCrunch - October 6, 2013 at 6:54pm
My advice: Get an Android phone. I got an HTC One, the "most carefully crafted, beautiful phone in history". Yea, right. Besides Android being noticeably slower on a quad-core 1.7GHz (or whatever it is) and 2GB of RAM than my iPhone 5 with 1GB of RAM and a DUAL-core chip, there were dead pixels after using the thing for a measly 2 months. I wasn't really using it as a replacement for my iPhone. I just wanted to try out what I thought might be a bigger-and-therefore-better screen. Yea, what a disappointment. Can't wait for my DUAL-core 5s, which retains 1GB of RAM, except it's DDR3, so it'll fly in the sky, baby! Oh, and to clear up any confusion about 64-bit, it's the OS that has to be 64-bit, and guess what: iOS 7 on the 5s, along with all of Apple's own apps...all 64-bit. :-P The reality is that 64-bit DOES make a big difference besides the addressable (4GB) of RAM, but the OS has to be 64-bit as well as the apps used. And Apple developers will waste no time, if 64-bit will help their apps. Anyway, yea, get an Android phone is my advice. You'll come running back so fast...and think of the benefits: You won't have to wonder which one's the better OS anymore! That'll be awesome, right? Bro? Brosees?
Reply · Like · Mark as Spam

Jimmy Nutrin - October 6, 2013 at 9:57pm
You always understood technology on the thinking brighter side while competitors are the copying wannabe side where all the samsheeps are! Just telling you I am pleased!
Reply · Like · Mark as Spam

NoGo0dNick sucks his name proves it - October 5, 2013 at 1:02pm
How is android far ahead! Not to say you are wrong but sure ios 7 is newer look maybe that's why battery life is dropping but their is a way to downgrade by restoring on iTunes with USB cable!
Reply · Like · Mark as Spam

Fuck them .Steve Gayod.'s - October 5, 2013 at 5:21am
Would jailbreak and whatever android does to work like jailbreak both work together for that to happen, or just remove the entire circuits from s(hit) 4 then move it to iPhone?
Reply · Like · Mark as Spam
2 More Comments
Recent