nFinity a leader in award winning voice recorder apps for the iPhone, Mac, and Windows platforms has announced the release of its new iPhone QuickVoice PRO Recorder w/Bonus at the introductory price of just 99 cents. QuickVoice PRO features added capabilities over its "Free" version of QuickVoice including the capability to send voicemails up to 20MB! It also comes with a free bonus copy of its award winning QuickVoice pC for Mac and Windows. "This is an amazing value!" says Kerrie-Lynn Corcoran, business manager for nFinity. "Our QuickVoice pC (Mac & Wins) desktop app sells for $15 all day long so, to be able to get a free bonus copy with your 99 cents purchase of QuickVoice iP for the iPhone is an absolute steal!" says Corcoran.

QuickVoice iP is the premier voice recorder for the iPhone and as such has become the #1 voice recorder in more than 38 countries. QuickVoice pC for desktop and laptop computers has also received numerous accolades in its own rite including the prestigious "Macworld Best Software Under $40.' These two companion apps provide tremendous versatility to iPhone and computer users. Features include: 1-touch record and save, voice email, voice reminders, desktop voice stickies, audio editing, and more.

nFinity also wants to use this opportunity to tell its user base (which is approaching 1-million users) to look forward to another major announcement concerning these products early in May. "We're talking high tech!" says Corcoran. "It is a major, major feature that's simply going to blow iPhone users away. The new feature is being beta tested now and we are chomping at the bit let the word out!" she adds. 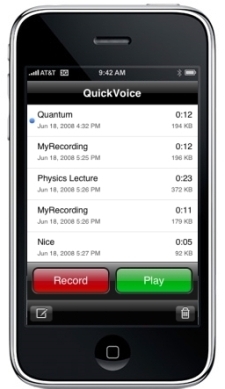