Pod2g has tweeted to accuse iH8sn0w and winocm of burning a valuable root exploit that could have been used for future jailbreaks to release p0sixspwn, a jailbreak for iOS 6.1.3, 6.1.4, and 6.1.5.

Nice! @winocm and @iH8sn0w burnt a highly valuable root exploit that would have worked for future iOS versions for a stupid 6.1.5 jailbreak.

A working exploit is very difficult to obtain and it's use is typically timed to have the most benefit to users. Usually, that means it is used on a major update.

In this case, it appears the exploit was one found by comex that hackers used internally to jailbreak their devices making it easier to create a jailbreak for public release.

Probably that you don't understand when I say highly valuable. It's something jailbreakers refused to use for years. Was found by @comex...

@pod2g @comex and they have two other invaluable exploits that could have been used instead :( 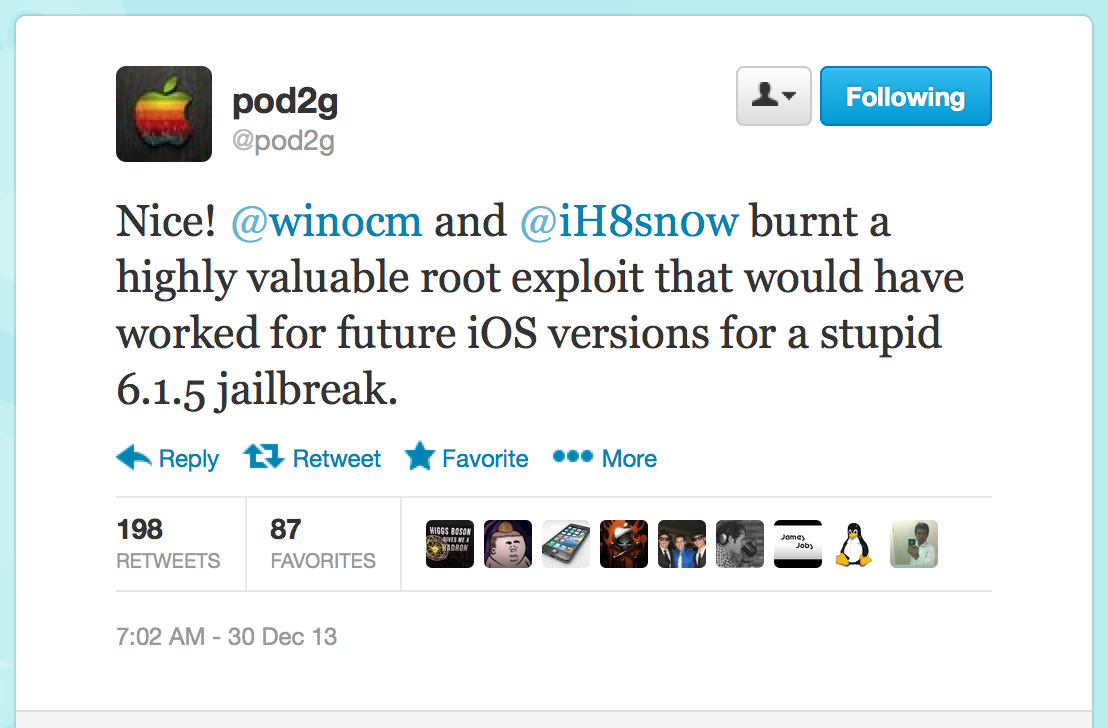 Archie - December 31, 2013 at 3:25pm
That stupid site shouldn't even exist !!! Has it done anyone any good except give Apple up to date information on the progress of jailbreaks, and how to close them ? ! Just goes to show, just because you can figure out how to jailbreak, doesn't mean you have intelligence !
Reply · Like · Mark as Spam

Truth! - December 30, 2013 at 7:46pm
That was really very stupid and lack of manhood to burn such a valuable exploit. Does Hi8hi8 or what his name is know/understood what he was doing!? Or was it just becos he's angry that his sabotage against his own friends to sell a jailbreak shamefully failed?... He should just be a man and also stand like one!!!
Reply · Like · Mark as Spam
6 More Comments
Recent