Apple will release a 12.9-inch iPad by the end of Q3 at the earliest, according to a new report from DigiTimes.

The site expects Apple and Samsung to top tablet vendors in 2014 with shipments of 80-90 million and 60-70 million units, respectively.

Samsung's recent launch of its 12.2-inch model is expected to propel Apple to accelerate development of large-size iPads. Market sources indicated that Apple is likely to release a 12.9-inch model by the end of the third quarter at the earliest.

The same site previously reported that Apple would launch a larger iPad in October 2014, to target North America's educational market. It's said that Quanta Computer will be tapped to produce the tablet. 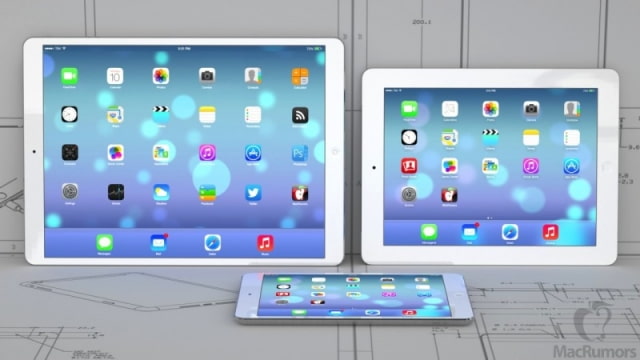 Ismeal Spamtos - January 20, 2014 at 8:34pm
Maybe others will follow as usual and still lose and repeat this as usual.
Reply · Like · Mark as Spam

Ismeal Spamtos - January 20, 2014 at 11:58pm
Inroducing another attempt for scamdung to rush their products again, remember the watch, after I watch idea was released, day after day here samsunk just revealed their watch and released it yet it barely does anything, and the cycle continues to repeat even if this comes to troll supporters fan club. This idea has been going on a while, now samsung, then their rush product, then a fail, repeat.
Reply · Like · Mark as Spam

Ismeal Spamtos - January 21, 2014 at 2:49am
Face the facts, are costs going to save their asses any longer, power is what matters, look at the benchmarks, you call it best any longer?
Reply · Like · Mark as Spam
17 More Comments
Recent