Download finished. Initial tests show that iOS 8 beta does not fix anything. Dumped kernel fine, but code changed and patches are not found.

I guess tomorrow I need a few hours in the office to fix the code and then the JB should be iOS 8 beta compatible.

Only question is if Cydia runs at all in iOS 8.

I0n1c demoed his jailbreak of iOS 7.1.1 last month. He has yet to confirm whether he will release a public jailbreak; however, it would make logical sense to wait until iOS 8 is officially released so as to not burn any exploits. 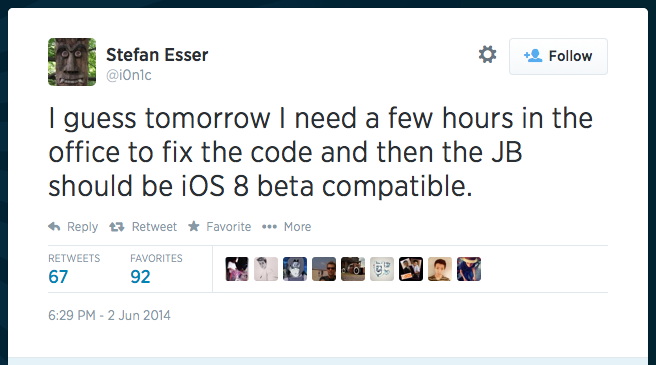 Makonken - June 4, 2014 at 10:18am
The jailbreak community is a part of Apple they just creates dramas to make public fool its marketing scene.
Reply · Like · Mark as Spam
1

no virus for me - June 3, 2014 at 5:25pm
Would have and could gave but didn't, that's rusty android for you. No more of that mold colored snotty shit.
Reply · Like · Mark as Spam
31 More Comments
Recent